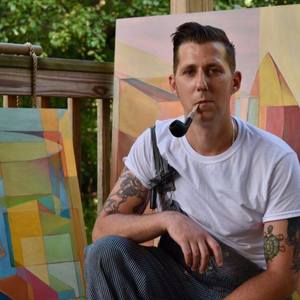 Todd Brugman is from the north shore of Boston, he has been creating and thinking about the visual arts for as long as he can remember. His interests and abilities were noticed and applauded by his parents and teachers as early as preschool. Todd has always been a dreamer, one who often came across as shy, yet he was never an introvert. He's a deep existential thinker, who’s thoughts go further than his head through his art; and the little notebook he always carries in his back pocket.

He grew up in what is often referred to a normal working family. Despite everything appearing safe, Todd and the life he's experienced is nothing of the sort.

What each individual considers ‘trauma’ is often relative to the life they have lead. Todd has experienced trauma time and time again, always putting one foot in front of the other. He sites his survival of said trauma to his ability to “think in the 3rd person”, think outside the box, and then navigate these experiences via creative means, visual art.

Todd's late teens to mid 20s were the most difficult time for him. Todd was coming to terms with the reality that he had survived a traumatic youth and was struggling to cope with, and accept it's effects. Ultimately he eventually overcame his demons, and faced his past through therapy and has become a better person for it. Although still haunted by his past he works hard everyday to stay strong and continue being a compassionate person.

In the past few years, Todd has decided to focus full-time on his art. He states that he must paint, “I’ll always manage to survive, have shelter and food, therefore my focus must be happiness and contentment, and for me that is synonymous with creating artwork.” For Todd, life is “painful,” for Todd life is “wonderfully beautiful,” he says these aren’t mutually exclusive for him. He paints daily at Shepherd Maudsleigh Studio in West Newton and he states that no matter where his mind is, even if it is in a dark place seconds before the brush hits the canvas, as soon as it does, he is transported into his work. He describes it as a world of the most illuminating ideas that are fleeting like a dream, delicious smelling colors of a nuance of emotion, ideas that are half answers without a question. This is a place of true joy and contentment. For Todd, painting is the reason.