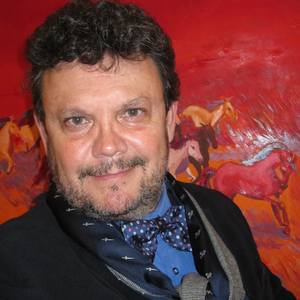 It matters to paint something than nothing.

My painting career starts ten years ago when I decided to approach art again. After graduating the fine art college in 1976 I decided to follow a degree in economics which I finished in 1984. I never lost contact with painting and I used to paint scarcely.
I reached a moment in my life when I realized that my time is running fast and felt a void in my soul which can only be filled with painting. This gave a meaning and a purpouse to my existence.

Painting is such an adventure. Every time I paint, I am wondering with my imagination and discover new and exciting things about the past, present and future of this wonderful World we're living in.

"When at the trap, when at the gallop, Victor Lucian Costăchescu beat the world until she, knowingly, allowed him to discover her. And he, well…he stopped to paint. He had done it a long time ago, when he was young, a teenager, a kid, maybe. And now, resuming the inverse flight of time, he does so with the boredom of the teachers - who admire - that the garden is great - the masters. He resumed, thus making and restoring his hand, Vermeer, Derrain, Aivazofsky, Annenkov, Razumov, Manguin, and even Kurbanov.

Victor-Lucian Costachescu is a talented graphic artist and an unassuming colorist: on the one hand, careful and nerve-wracking cracks, on the other, the chromatic explosions whose thick paste tends to grow in delicate bas-reliefs, represent the limits of the artist's world. And he, hungry for the visible, seeks to push them to the savagery of color, to the unspeakable precision of the line and beyond the unseen door, as in "Nocturna" with a darker and more fawny soul than of a late and late Romantic poet. And the horses run in their will in his art — he, half biped centaur.

Family portraits — accurate and restrained (not to mention) —alike to Nicole and Cristina, are one; the other is his self-portrait. In the background of this votive document, beyond the butterfly, where a Skandenberg emerges between kitsch and self-irony, Tonitza's little girl, the liar cracker, appears as an icon.

The delights are promised elsewhere, in nudes and in signs left on the shore by other fences (sometimes, by a wave), in Greek landscapes (the sea often does it with the eye of freedom) and especially in the excellent minimalist "Boats", which opens a direction I hope to follow, because it fits as a glove."