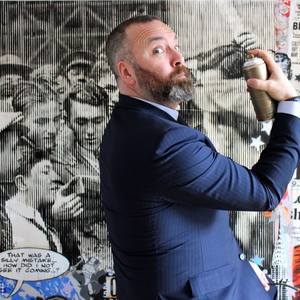 D13ego is an Italian born painter based in London.
His artistic career began as a portrait artist at the age of 12 and quickly broadened to comics where he worked as a teenager for a local magazine. By the early 90s his arsenal had expanded to spray paint while the graffiti culture started to develop in Italy.
He became a professional artist in 2013 following 15 years in the City of London as a financial trader.
The Badass Girl Collection was born on the streets and tunnels fo London and eventually found its way to the canvas, exhibitions and galleries.
In this series D13EGO combines his love for comics, elements of pop art and a good sprinkling or irony to portray today's strong and independent women.