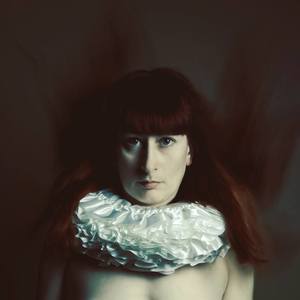 Elle Hanley is a self taught American Fine Art photographer currently living and working in Seattle. her work is alluring and unexpected focusing mainly on capturing beauty and emotion in a still shot of time.

Elle enjoys the challenges in creating something classic and timeless from a thoroughly modern process and the contradiction between the two is a strong theme throughout her work.

currently she is mixing the realms of art and fashion, working to expand her current open series, as well as creating self portraits. always working on several projects and bringing new and intriguing characters to life to photograph.

please sign up for her art folio: inside art via the artist's website to receive discounts and invitations direct from the artist to your inbox.

Id - The Object of Self
Group Exhibition, Darkroom Gallery - September 2012

Both Sides of the Lens
Group Exhibition, The Kiernan Gallery - April 2012