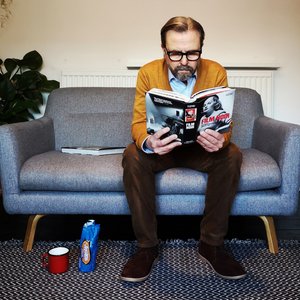 Gary Andrew Clarke (b. 1970) is a painter based in Stockport, England. His work has been exhibited in the UK, Europe & the US, and is held in private collections across the world.

More recently, paintings #258 & #224 were used by The Strokes for their official gig posters for Berlin & Paris.

He grew up in a small village in the south of Leicestershire, England and studied graphic arts at Manchester Polytechnic (later Manchester Metropolitan University) from 1989-91. He subsequently spent several years working within the music industry for several major labels. He later settled at the independent Twisted Nerve Records, working 8 years for his friend and the 'one-man counter-culture revolution' that is Andy Votel.

Since 2010 he has been creating small scale paintings. As a child of the unapologetically naively futuristic early 1970s, this work is mainly influenced by the ‘hard-edge’ and ‘geometric abstraction’ art from that period. An attempt to create art that might be on the walls in Logan’s Run or Space 1999.

The paintings investigate the push and pull of pure geometry and colour, often with deliberate spatial contradictions. There’s an emphasis on the simple structure, the fullness of colour and the flatness of the painted surface. They often suggest visual puns or might perhaps be elegant solutions to non-existent problems.

Ideas evolve out of a stream of consciousness pencil sketching. The ideas and structure are fine-tuned with help from Adobe Illustrator, and this becomes the study for the final painted work.

The choice of colours is of importance, and much effort is dedicated to finding the perfect partnership for each work. These colour combinations are deliberately curious and unconventional, avoiding the obvious colour theory pairings.

The work is not intended to be minimalist but nevertheless, it is deliberately non-representational and avoids imagery or metaphor. They are ultimately devoid of any narrative meaning whatsoever. “What you see is what you see.”