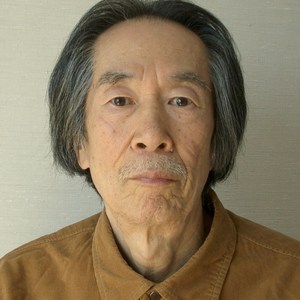 After a long time of the authoritarian art history of the world, in today’s democratic world, we have to make real humanitarian art evaluation standards, so that artists’ living social activities, minds and esthetic theoretical intentions are the most important issues.

My intention of making visual art is to represent my own pure activity of thought and emotion by rationally constructed trace on a flat space. No one ever tried my methodology. This must be the true way of representing contemporary human’s psycho.
[ I have been fighting against Jap-soft-fascism for 40 years. So I am very proud of not having collected my artwork by Japanese public museum, so If you could purchase almost all of my life works (about 200 pieces) for Two million USD, I would be very delighted.]

I was born in 1936. Graduated Aoyama Gakuin Senior High School, and enrolled in Tokyo National University of Fine Arts and Music and left in 1963. I have had many different solo, group exhibitions in Tokyo, Yokohama and Mito, and those were featured in newspapers and major art magazines many times, and a TV program of TV.asahi in 1978. When The Museum of Modern Art New York curators party visited Japan in 1971 , they selected my artworks as one of the most interesting eight arts in Japan.