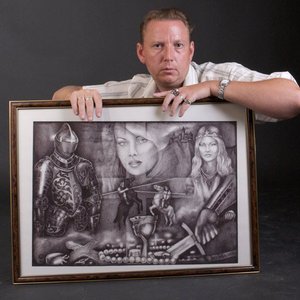 "Serhiy Kolyada got in hot water with Kyiv's art establishment with his ballpoint-on-construction paper productions, portraying Kyiv as a melancholy zone of shadows. Check out his Web site (www.kolyada.com) to see his nude or semi-nude women depicted against shadowy backgrounds of corporate slogans. It's art as social commentary: gutsy reflections on money, power and gender issues in Ukraine." (50 Great Things About Kyiv, KYIV POST, Oct 20, 2004)
"...Serhiy Kolyada's politically infused ballpoint pen drawings have left him virtually ignored by galleries in his home country of Ukraine. Publicity comes mostly through English language media and a majority of sales to foreign clients via private viewings and online galleries... Kolyada works in black ballpoint, using other mediums and collage occasionally to add color. In 2006, religious themes and "the mystical side of life" became subjects of interest to the artist..."
("Ballpoint pen artwork", WIKIPEDIA)

1991 - Was excluded from the University for the taking place in democratic anti-communist regime compaigns. Then went to Sweden to ask the political asylum. In a month get the refusal ( it was the time when the putch failed in Moscow and Ukraine got the independence in few months ) and went back to Ukraine

1993 - Applied for the emigration to the Canadian Embassy in Kyiv (Ukraine) and got the refusal. Entered Teachers Training Institute in Berdyansk (home town) and continued my education

1997 - Finished the Institute and went to Kyiv, the capital of Ukraine to make an artist career. Got acquainted with a lot of foreign diplomats and began to sell my art. At that time applied to a lot of Kyiv's galleries for an art-show and got the refusals because of the criticism of anti-human regime of president Kuchma

2001 - Had my art-shows at the residence of South African Ambassador Mr. Delarey van Tonder and at Kyiv International School (founded by Americans) and had a great success

2003 - My friend made the web-site for me. So people got the possibility to see my art on the Internet

2003 - Worked as an artist- illustrator in "Generalny Director" magazine

2011 - took part in “Art Kyiv Contemporary” with “Velyka Okruzhna or Welcome to Euro 2012” project in Mystetsky Arsenal in Kyiv-city, Ukraine.