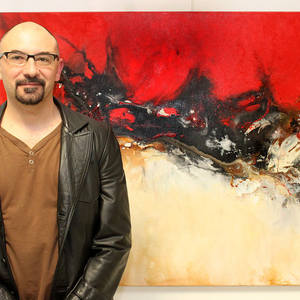 Mariano Kovalsky is an autodidact artist whose work is based on experimentation and evaluation of every process he approaches.
This way of working, in which theory, experimentation and spontaineity are combined, results in a expressive-reflexive-random-directed work.
This artist attempts constantly to approach every canvas with the jam imprint, the vertiginous character of jazz executed in only one session, with no posterior touches or corrections. The value of improvisation is primal goal. Thus, the work does not include drafts in order to reveal its purest nature.
Mariano Kovalsky took courses with Professor Héctor Bonino, in Lavallol, Buenos Aires. This couse comprehended one of the most daring aspects of art in his opinion: colour.
In these days, his research leads to colour and movement from abstract impressionism.


Reviews and definitions outside...

"... Instinctive, oblivious to the sketches, Kovalsky experience boldly that concern to the spontaneous.
Aesthetic instant, the reflection, the appearance of density and dissolution of form. This raises the exaltation and restoration of the monumental image, enhanced by the color, contrast and saturation marking accompanying faint segments. This is how the painting process as creative and liberating experience ...”
Françoise Karina. Art dealer. March 2015

"We asked how to define your style and said:" My style is abstract expressionism, fully based on my interpretation of music visible intend my works interpret sounds, songs, melodies that flow like ... I like the drive as leiv motiv, voracious impulse ... "
We feel that momentum in the explosive and lively composition of his works. There is a feeling that is transmitted through the flow in the colors and lights that open against the contrasting and complementary shades. Kovalsky generates conflict and bold impression through their palettes loaded with life and conceptual worldview ...”
Pollock Gallery of Art. Buenos Aires, Argentine, November 2014.

EXHIBITIONS:
Among the most important exhibitions, I must mention the HFAF 2014, Houston Fine Art Fair 2014, in September 2014, participating in the stand of the LZ / MP Gallery, Buenos Aires.
In January 2015 I participated representing Argentina in the Latin Art Fest in Dubai, UAE. (with Curator Mariana Turchio )
Also in Italy in the month of July 3 to 16/6 in AMORETTI VILLA - TORINO, international group exhibition.
And in the month of September 4 to 11 in AURUM, city of Pescara, Italy, exhibition with the prestigious international art movement NEUTRAL-ISM, which belong since 2013, founded by Francesco Perilli, artist of great renown and international recognition.
In 2016 I’m showing my work in Artissima Gallery in Dubai, and Gadeemadis art Gallery in Abu Dhabi, EAU.

In Argentina:
International Expo "Diversity" in Falkland Islands Cultural Center, La Plata, Buenos Aires, in September 2014; in "Night of Museums" event in "Flea Market", Buenos Aires, November 2014; international expo "Cultural Encounters", Hippodrome of Palermo, Buenos Aires, May 2014; shows staff "Picasso art gallery" Venado Tuerto, Province of Santa Fe, Argentina, in April 2014; plus more than 50 participations in group exhibitions in the course of the years 2008 and 2013 (including ARTEME Gallery prestigious artist Carlos Reggazzoni)
In February 2015 solo show Guijuana Art Gallery, Buenos Aires. On March 14 to 4/4 international exhibition in Fine Arts and Museum Peña in the city of La Plata.
From 17/4 to 10/5 solo show "VORAZ" Center of culture Almirante Brown, Buenos Aires.
In June, 21 to 7/7 of an international group show at the Faculty of Law at UBA.In June from 12 in Space Cabrera (part of the University of Palermo), exhibition of abstractions. City of Buenos Aires.
ARDI, design fair in Buenos Aires in June.
Honorable Senate of the Republic of Argentina, in July. (With honorable to the artistic work in Argentina mentions)
Arenales 1925 Gallery, in Buenos Aires, Argentine, in October.
Over the years more than fourthy works sold, of which one third have come to places like Canada, Brazil, USA, Spain, Italy, Bulgaria, Chile, Paraguay, Uruguay, Mexico and France.