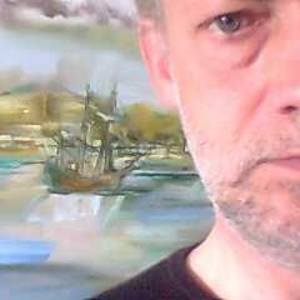 1963, Cambridge born, Nicholas James Juett returned to home-ground, after an exciting transatlantic career in the United States, lasting fourteen years.
From 2002 to 2015 Cambridge partnerships have lead to interesting developments. His exhibition credits include the cities of New York, Chicago and Los Angeles; and in Europe, Zagreb, Cakovec, Rijeka, Cambridge and London.
He began by working on a series of paintings of street facades around his home city which use his trademark vibrant colours to transform our perception of some familiar locations. The title of each painting is the postcode of the street depicted, so that every painting in the series may be topographically situated on a map or on the Internet.
There are pieces of Juetts work that belong to a wider series of vibrant interiors, each featuring an imposing and provocative blank television screen. Writer and film producer, Nicholas Klein described Juetts work as panoply of distant memories, punctuated by familiar objects: it is as though the work reflects something personal and private while maintaining universality by featuring familiar objects which provide the observer points of cultural reference. Nevertheless, it is the flamboyant use of colour, indicative of the artists own personality, that is the key to appreciating Juetts work. These 'TV' interiors were exhibited at Kettle's Yard in Cambridge and the ROH in London.
Post 2015 is the release of researched work based on The Journal of Robert Juett and his voyage with Henry Hudson in 1609.

Started art at Chesterton Comp. Next stop the C.C.A.T. in Cambridge previously the Ruskin School of Art, provided a Fine Art training of both quality and focus, at Foundation Level as well as A Level. His first degree is in Fine Art from Reading University, and he went on to take a Masters in Fine Art at the School of the Art Institute of Chicago, where he studied as a Rotary Scholar. He moved west to Los Angeles for a few years, but returned to Chicago for more art training which included a residency in New York. Top artists and curators awarded him an affordable studio for one year in N.Y.C. which then became his permanent home. Choosing to return to the UK In 2001 he moved to Exeter, and he taught there until he took up the offer of a studio at Wysing Arts Centre located on the outskirts of Cambridge in 2002. Now he divides his time between teaching and painting, having completed a Post Graduate Certificate in Education from Cambridge University, 2005.

Future Shows: The series of oil paintings which will be on display over two weekends (this July) at Gallery 96 on King Street in Cambridge range in size and price, to enable the finished works to fit the right wall space perfectly. www.camopenstudios.co.ukYou may also visit his working studio at Wysing Arts Centre, located on the outskirts of Cambridge. www.wysingarts.orgAlternatively, be apart of the new gallery monthly exhibitions held in Cambridge to see a picture by Nicholas. Look out for his June solo show. www.homeaffairsinteriors.co.uk