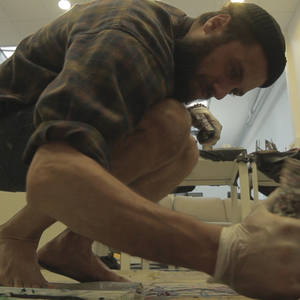 Taher JAOUI compositions are built on an intuitive and an unconscious process. He uses different sources of inspiration, spanning from cartoon and graffiti-like drawings to Abstract Expressionism and Primitivism movements. Jaoui’ s work joins together painting and drawing, abstraction and representation. Through a personal language in his compositions, he aims to stimulate a the viewer’s feelings and imagination and let him build his own interpretation of the picture. His often compose with semi-figurative elements, such as heads, legs, eyes or hands. He combines an aggressive use of color and texture with various combinations of oil, enamel, spray paint and charcoal on canvas.
Taher Jaoui was born in Tunis, Tunisia and currently lives and works between Paris and Berlin. His work has already been exhibited in various group and solo exhibitions across Europe, Africa and the USA.