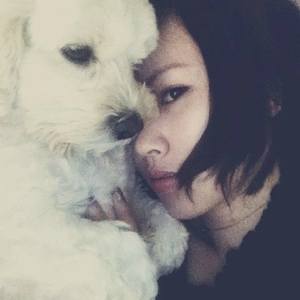 Luo Yung, formerly known as Yang Wanlin, was born in Nanjing, Jiangsu Province, and graduated from the oil painting department of the Academy of fine arts of Nanjing Academy of Arts. At present, she is a professional painter and an independent musician, also a member of Erdo Liu band. In 2016, she began to release her music works, trying to present her own inner experience with symbolic words, natural flowing melody and poetic painting. Works usually contain some philosophical thinking.

Graduated from Nanjing Arts Academy in 2012.

Luo Yung spent his childhood in the disappearing old streets of Nanjing. In the city life, Luo Yung lived her childhood. In her later musical works , the lyrics: "The winter moon hangs quietly in the treetops. If you don't look at it, it will disappear. Our time is submerged in the water. If you don't pick it up, it will fall asleep." She expressed her regret that her childhood was gone forever. Perhaps because of the long-term discord between her parents, Luo Yung was sullen and surly in his adolescence. She doesn't like the new apartment where a group of people are stacked together, and she doesn't like not having a word to say at home. So, she closed herself up and devoted herself to the study of painting. After learning painting, Luo Yung looked even more strange among his classmates. At that time, few students went to school with their Sketchpad on their back. The math teacher was very sad because Luo Yung could be a good scientist. Later, Luo Yung was admitted to Nanjing University of the Arts with excellent professional results. She participated in many exhibitions and won prizes in the university. After graduating from the Academy of fine arts, forced to make a living, she learned software for design and went to Hangzhou to do decoration design for two years. Later, because she was not used to the strong rhythm and interpersonal relationship of the company, she resigned and returned to Nanjing and rented a small studio to start painting again. Just then she met Erdo Liu. Erdo had just finished his psychology study in Italy and began to write music back home. They hit it off, and Luo Yung drew the cover and song illustrations for his first album. After working together for some time, Luo Yung even began to try to match harmony and percussion for Erdo. After a semester of Guzheng in junior high school, she had some music foundation, which made her master quickly in the later study of accordion, horse head instrument and Whistle Flute. In 2015, she formally joined Erdo Liu band as a musician, and began to release her own music works in 2016. She tried to present her own inner experience with symbolic words, natural flowing melody and poetic painting. Her works usually contain some philosophical thinking.