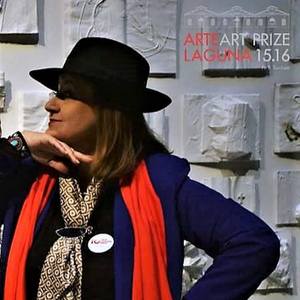 Gioia Maria Aloisi was born in Castelnuovo di Garfagnana, Tuscany, (It)
Diplomated in Carrara at the Academy of Fine Arts, where she embarks on a training in photography and graphics. Then, her passion let her known some artists as: Bruno Munari, Mario Ballocco, Gianni Colombo, Silvio Coppola, Cruz Diez, Enzo Mari, Denise Réné, Pier Carlo Santini, Fausta Squatriti,Luigi Veronesi and many other.... Her work as a graphic artist began in the early '80s, where she's interested in other forms of art coniugating them to create ecleptic projects .
She won the first prize for a poster on peace: "UNESCO twice 20 years" - Photo / Graphics G. Aloisi-Paris 1986.
She won also: -The photo contest: "Children in Versilia" -Municipality Viareggio-1993.
- The best 100 Italian photographers in the ZOOM Image Bank 133-1995.
- One of her works Electron 9 was the finalist at the International Film Festival Aquino, Italy, 2003-
And so go on...her images were selected in numerous photography competitions including the "first international prize",
Black and White Spider award's photo contest in Los Angeles.
Workships:
In 2005 she founded Edu-art in Milan, a creativity center, where she made some projects, such as:
"Discovering the invisible" a dark installation, exposed in Milan.
Multisensory sculptures "Touchsenses" and "The Way", then exhibited at New York's Metropolitan museum in 2007 and 2009.
"Contromossa" or "countermove",a photographic project against violence on women
" Stargate"-Istallation in dark in Ferrara for the art Biennale 2010 and "The body and the poem" photo / poetic project exhibited in Paris in 2010-
"Passage and landscape"-Photo and art project exhibited in London in 2011 -"Dreams from Karim Lin" photo project (which ended with a live performance)
exhibited at the Triennale in Milan in 2012 during the Festival on the Rights of the Child and many others.
She's exposed the "White to white'' sculpture for Paratissima 2015, which has selected in the Hit Parade of the best modern work, then exposed at the Mauto museum in Turin, Italy.
Finalist of the Laguna Art prize 2016,for the installation "War to War", exposed at the Venice's arsenal, (Italy).
More recently :
She was invited to the 4th Biennial of photography in Berlin, Germany 2017 and now at the 5th Biennial of photography in Barcelona in Spain 2018
Finalist of Pollux award international photography contest in many categories and Honorable mention in Architectural categories
Finalist of Margaret Julia Cameron international photography contest and Honorable mention for "women"
​Finalist of the Spectrum Miami art competition, the artist was selected as the finalist of the competition and was invited to exhibit at the Miami ART FAIR 2018