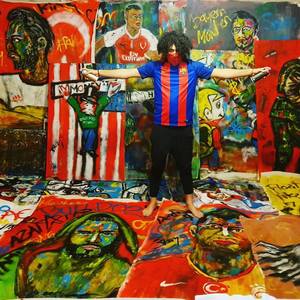 For a long time he did not pick up his brushes, he also wanted to become a big footballer like Zidane or Maradona his idols, unfortunately he could not do that. He had injuries in his childhood again and again. In painting, it was all about reflecting on oneself as well as explore the relationship to other media such as photography and film in principle. He has found the dream to manga he scribbled pictures of Tsubas and Dragon Balls childhood. This self-critical feature also characterizes the work of the Swiss artist born in 1981 with Turkish roots 3kay. At 10, he painted and played football but the ball was his one and only addition to football, he was also creative had things put on leg. In the meantime, he was among the stars worldwide such as Adebayor, Arda T. international footballer, G.Inler ex-captain of the Nati, Kaya yanar comedian, Kenan Sofuoglu GP 6-fold world champion, Breel Embolo, Albian Ajeti Swiss footballer and the big banker in Zurich. He wants to show his work around the world. His dedicated occupation with sports content. 3kay swiss artist his motto is swissinspiration he wants to inspire everyone with his art he also says sometimes you have to go on it and also be a bit aggressive that's the beginning. He works and focuses on steetart, collage, oil etc.
He has made exhibitions in many places, unfortunately he lacks support. Flying costs a lot of money and the relationships the right relationships are missing
I will not give up until the sun is shining. He quickly presents his pictures on Instagram. He earns his living with his works. He would like to meet Roger Federer and Zinedine Zidane the modest and the down to earth I respect the two that they have remained the same. Art to bring someone into it is something completely natural it is like a bio product especially the colors the variety in it you see how many races how different we really are but the principle is and has a name of art for everyone it's something else the consideration of art is to have joy in it. I was much insulted even not accepted because I am so male now but that does not bother me.