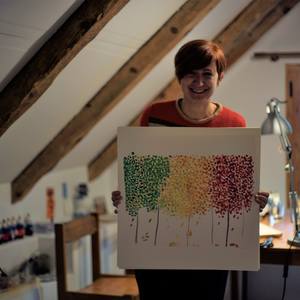 Before Istarted painting on silk, I was already familiar with the world of textiles,which had always drawn my attention because of the interplay between their boldimages and delicate nature. Specifically, I was taken by the colours of batiksand saris, and I wondered how their designers were able to craft such intricatedesigns and yet harness such bold colours. It was in response to this that Idecided to research these techniques and came to meet a silkscreen artist inBarcelona. From that point on, I actively began to practice painting on silk —which I found to be an intimate and unpredictable world. Silk painting, Idiscovered, had little to do with the oil painting I had dabbled in yearsbefore. Inks, with their almost random behaviour, assert themselves in such away that one knows there is no turning back — and it is at that very momentwhen one’s heart floods with emotion. This raw emotionality is what I have feltever since the first time a paintbrush led my hand to infuse the infiniteemptiness of raw silk with colour.  When youpaint on silk, the “canvas” isn’t held in a vertical position on an easel —instead, you work on a horizontal surface. Your body actually leans out overthe fabric, as though you were silently watching a lover, or a sleeping baby.And it is only once you have coloured in the entirety of the fabric that youstand it up on end. At that point, it is no longer yours — it has awoken, andhas its own identity. The themes that serve me as inspiration come to me from awide range of sources: some arise from images I capture on my camera during mytravels, while others are natural elements that captivate me, as well as thework of other artists. I spent mychildhood in a small village high in the Pyrenees. There, and especially as achild learning the ways of the world, one is but a small presence surrounded byomnipotent nature, whose dominance comes without question. There are thousandsof small details — that an adult would perhaps not see — that children areinstead able to magnify and retain as deep-held secret treasures. And withoutmy even needing to conjure them, I can put my brush to silk and they come tolife, almost entirely out of their own accord. The immutability of abrushstroke on silk — in a way — is like the permanence of the peaks of thePyrenees; they are elements that transcend us human beings in both space andtime, and yet interact with us on an almost microscopic and subconscious level,whether we acknowledge them or not. The mountains and skies of my childhood areinfinitely larger than what one can even see, and yet remain so vivid a notionin my mind that every detail of them accompanies me still. As I paint, theimages I have taken in over a lifetime — these forces large and small alike —express themselves through my hand. Staring down at a blank piece of silkcloth, my hand transmits colour to it; images unfold, my life in miniature, theyears and days and mountains and blades of grass — all of it — is made manifest,awaking from a slumber in me, as it shines in brilliant colour.