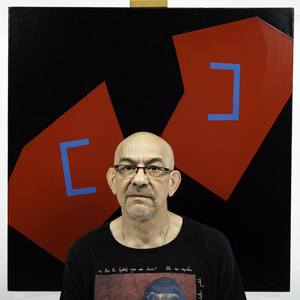 Nikolay Cherednichenko was born in 15th of December, 1958 in town Nahodka in the family of military man. From 1968 he lives in Moscow. He was graduated from school in 1976. In 1979 he finished studding in electromechanic technical college. From 1980 to 1982 Nikolay served in the soviet army. After the army he worked as porter, woodman, constructor, radio operator etc. In 1986 he entered Moscow Architerctural Institute and graduated from it in 1992. During the study Cherednichenko has worked in different theatres-studios as sound engineer.

From 1989 to 1992 he studied extensively human bioenergy. From 1989 Nikolay began to work with sculptures professionally (plastic arts, wood). He started to paint in 1991. From 1992 painting is main and one profession of Nikolay Cherednichenko.

Critics define the style in which Cherednichenko works as monovisual kinematical expressionism. The artist mostly works in three genres - expressionism, figurative and concept. Nikolay Cherednichenko is two times a laureate of national Popkov prize in within the all-Russian artist's competition "The art of Russia" in 2004 and 2006. During the last 20 year Cherednichenko has painted over 800 works and participated in over 17 personal exhibitions and 15 group expositions as in Russia so abroad.