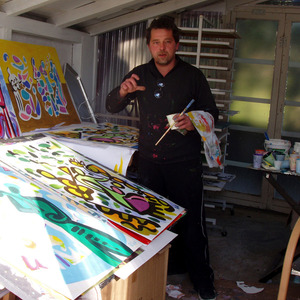 I live in the coastal town of Vodice, Croatia. Like many other Mediterranean cities, it really lives in the summer. That is why my artwork is tied to that rhythm.
For 30 years of my career, I have been to Atelier in the winter. In peace, outside the mainstream, I create new and new cycles. Of course I work in an olive grove for a vacation.
In the summer I do an exhibition in my gallery Ispo Kanpanela Under the Belfry in downtown Vodice. There I have good communication with many audiences.
In artistic terms, I was formatted in the 80s.

“EUropean Jazz @ UCLA”
Buzzes with Sound and Image By Diane Sippl kinocaviar.com
http://www.kinocaviar.com/european-jazz-at-ucla.php
The original paintings, acrylic on canvas, were created by Ivanda in his picturesque coastal town of Vodice, Croatia, where his gallery, Ispo Kampanela (Under the Belfry), is one of the cornerstones of “Vodice Summer,” an annual nexus of art and culture. The scintillating colors and lines of Ivanda’s paintings first took their form in his “Seaside Jazz” cycle, the name of a music festival that inspired him to explore the interaction between the sonic and the visual in art, and he has since found himself enthralled with the mission of visualizing the sensations of the jazz sound within the local land-and-sea setting.
Ivanda’s postmodern acrylics bring primary colors to beige bricks and gray stones. Ancient towers and sky-bound steeples dance with the masts of boats over jetties and moorings set afloat with the buoyant hues. Adriatic azure turns jazzy blue, and the town flares in the sun, a-tilt, on-the-run. Red roofs jump to tympani drums, and old cobbled steps fly with folk-notes anew. Arched walls bend like the strings of a bass, like the trill of a horn over the marina's eye. Alleys climb hills like narrow notes on the scale or swirl to the sea and prance past a palm. The rhythm jives — the town’s alive — and Roko Ivanda takes us there. You can hear it in the air….