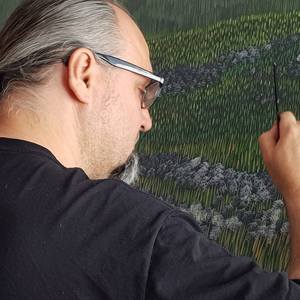 Jacek Malinowski (b., 1969.), Graduate School of Arts them. Julian Fałat in Bielsko-Biala. Currently lives in Gdansk, Warsaw and Tuscany. The author of such projects as: Week of Christian Culture, "Arts Magazine", CAT3W - Creative Activity Centre Third Age. In the "Arts Magazine" teaches drawing and painting for adults. It implements social projects, artistic, and cultural and educational activities of the Association of Creative Activity Support "FreeArt", which is the president
The artist spends creatively every year the summer in Tuscany in Italy, where he still created a series devoted to Italian painting the landscape. The subject of this landscape has been treated as an attempt to find a symbol - a synonym of the Tuscan landscape. Malinowski increasingly moving in the direction to show abstract forms which, although still a synthetic references expressive, organic and filled with emotions message.
By contrast color! ... Is an absolute explosion of feelings. The paintings are extremely expressive color with strongly saturated often contrasting colors. Deep purples mingle with blues, black and mint green. His paintings are a constant search traffic, dynamic confrontation with the static space planes. Discovering the kinetics of color. Yes, Tuscany - one of the most beautiful regions in the world, its beauty, atmosphere warm, Mediterranean south afflicted artist.
Malinowski raises the questions: What is to him what he does? Is art only hackneyed concept that is reflected from the wall de-sac, in which zabrnęła? Do artists shimmering priests human emotions are not mere coincidence cheaters? Answer still is not, but it's probably not surprising, in the end everyone carries the potential, which nobody in the world can not know one hundred percent.

Graduate School of Arts them. Julian Fałat in Bielsko-Biala

Individual exhibition - "In the Meantime" - Gallery in the vestibule - Warsaw