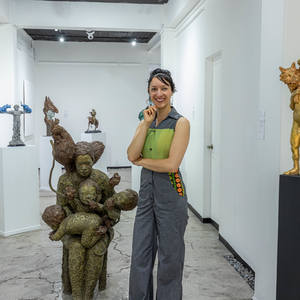 Conducts studies in Visual Arts Degree with an average position in the High Academic Performance Program at the Academy of San Carlos, UNAM. From 2006 to 2008 the final year of master studies with honors in the same Institution.

City of Books, if you visit Mexico City, don´t miss this place where you can find my work available to the public:
http://www.cultura.gob.mx/ciudadela/