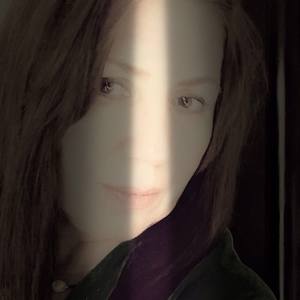 Antoaneta Melnikova-Hillman Is a self-taught artist. She considers herself to be half Bulgarian, half Russian and 36% American. Her grandparents lost everything in the Russian Revolution, fleeing for their lives to Turkey and later to Bulgaria. Antoaneta was born in Pleven, Bulgaria, where she began her career in the arts writing poetry, influenced as was her father by the beauty of Russian literature and language. She published two books on poetry and her poems and stories appeared in various newspapers and magazines throughout Bulgaria.
"¨ Antoaneta began to experiment with oils at the age of eighteen. Her works first appeared in group exhibitions and later individually in Bulgaria. She exhibited her work in Cyprus with a series of paintings dedicated to women and love, and since coming to the United States of America she has broadened her skills to encompass encaustic and acrylic mediums. Her work here has been displayed in a number of exhibitions in the greater DFW area and her paintings are in private collections in Bulgaria, Italy, Cyprus, and USA."¨
A resident of the USA since 2001, Antoaneta has become accustomed to a new home and culture here in America where she continues her career as an artist.