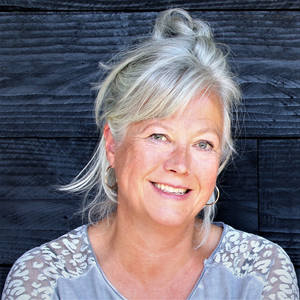 Barbara Houwers is a Dutch artist, working in painting, sculpture and 3D-Print. She lives and works in Blaricum (Amsterdam region). Her successful series inspired by themes around the human being have led to many exhibitions and commissions from companies, government and institutions. Barbara’s works can be found both in private and corporate collections and public buildings.

Artist Barbara Houwers above all became known for her paintings of human figures, mostly painted in subdued earth tones, followed later by more abstract works of art set up in geometrical patterns and sometimes in bright colours as well. More recently three- dimensional works have been created as well as objects designed by 3Dprint technology. This seem a significant breach of style but, as is the case with many artists, this is actually a logical development of Houwers’ basic forms.

The human figure dominates Barbara Houwers’ oeuvre. This was already the case in her early autonomous works when she debuted in the early 1990s after her training at the HKU Academy. In her paintings from that period we see mainly stylised and isolated human figures. By combining the human figure with forms and colours, a life-story evolves in which emotions and experiences from that life are expressed. Throughout the 1990s this theme was developed further by adding more human figures to the composition, thereby creating a sense of connection and communication amongst the figures. These works evoke a strong sense of recognition with the viewer. Houwers’ technique widened from traditional painting to a more experimental use of her material. The paintbrush was partly exchanged for a palette knife and next to paint other forms of material were introduced such as sand and synthetic resin. This experimental approach to her material also re-appeared in a series of artworks Houwers was working on at the beginning of the millennium and in which the aspect of space was the dominating factor. In these artworks the human figure was combined with an ‘open’ space, built up from layers of paint, sand and resin. The contemplative element in these works was emphasized by its open character. It literally created space for contemplation.

The first steps towards geometry already appeared in the luggage series of 2007 where small cases were added to the human figures as metaphor for experiences gained during the journey of life. Thematically these works have a seamless fit with Houwers’ earlier work but her technique is shifting towards the geometrical form. From 2010 onward the angular form is being emphasized and Houwers applies her paint with a palette knife in forceful and repetitive strokes. The human figure becomes a contour against a background divided into geometrical colour blocks. In these blocks we can already distinguish the new path that Houwers will take in years to come. The beauty of these artworks is created by techniques and materials used by Houwers. Hereby art is created which above all refers to itself and less so to the tangible world, comparable to the abstract expressionism from the 1950s. In Houwers’ formal work beauty is to be found in paint structures and the use of subtle or sometimes contrasting colours. In their beauty these works still appeal to the viewer on an emotional level but not on a narrative level.

The search for a new formal art form has recently set her on the path of three-dimensional art. In the past years renewal has mainly occurred in experimenting with spatial forms. Houwers considers this search for forms and materials as very inspirational. She often works intuitively, especially when using clay. Instinctively it takes her back to her academy years when her art was still marked by experimenting. A new form which has evolved from these experiments is the stylised shape of a leaf. This form.....http://www.barbarahouwers.com/en/biography/biography-2/