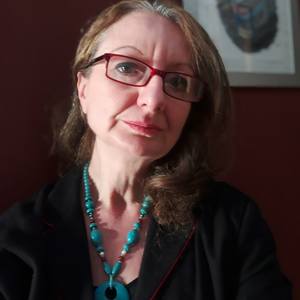 About Cinzia Cremonesi Adam A


My Artwork is based on a passion for drawing that was born at a young age and I have never abandoned.
My common thread follows a great enthusiasm for life and an unquenchable curiosity in knowing. The pleasure of transmitting signs and colors in fragments of life, thoughts, conquests and defeats.
I love what I do now more than ever before and in a constant way every day, even now, always.


Review//
A woman Artist with an intriguingly incongruous, attention-getting name, the Italian painter known as Adam A appears at first glance to be a stylistic relative of both the Cobra group and A.R. Penck, given the seemingly intuitive neo-primitive energy of her iconography. Looked at from a more homegrown angle, the work on view on Adam A's website (essereadama.com>) could also seem a direct extension of Italy's own Transavanguardia movement of the late 1970s, given the vital new spin that she puts on the visual vocabulary of Expressionism as it was revived in the late 1970s by Sandro Chia, Francesco Clemente, and Enzo Cucchi.Yet the more of her work one sees, the more one realizes that Adam A is a true original who holds no allegiances to any particular school or tendency, having evolved her own distinctly international answer to how, in an age that often seems dominated by robotic technology and multimedia, the venerable tradition of painterly figuration can remain a valid vehicle for simultaneously conveying a sense of contemporary angst and timeless beauty.The refreshing directness and power of Adam A's work is immediately evident in her painting La Vita, which celebrates the richness of life and love with two starkly simplified overlapping heads inscribed in a raggedly elegant line akin to that of the late American graffiti prodigy Jean Michel-Basquiat and set against a vibrant orange ground further enlivened by a variety of rough symbols and muscular gestures. Adam A, however, moderates her spontaneity with a European aesthetic refinement that imbues her work with its own special tension.A more pointedly political feeling comes across in L'Ecologista, another painting by Adam A, in which a rectangularly stylized semiabstract figure dominates the composition, posturing histrionically amid a flurry of vertical black strokes that could suggest a waist-high field of charred grass and vigorously brushed circles within squares which could seem to symbolize the harnessing of solar energy or its opposite: the imposition of our geometrically rigid schemes on the organic beauty of our natural resources. Is the dominant figure in L'Ecologista a noble knight set on saving the environment, or a buffoonishly hapless ecological Don Quixote?Adam A's combination of bold, cartoon-like simplification and vigorous action painting leaves all such questions pending.The viewer is obliged to engage in a lively dialogue with the painting in order to arrive at a subjective interpretation that makes him or her feel vitally involved almost like a collaborator with the artist!Even more important than the many political, philosophical, and historical issues raised in the paintings of Adam A, however, are their purely visual, tactile, and coloristic attributes. In compositions such as Fecondazione,La Sostanza, Mondo, and Confronto, primitive stick figure surrogates for the human image, starkly stylized heads, fragments of scrawled text, an animated array of overlapping circular and oval shapes(sometimes borne witness to by veritable hordes of stylized eyes) make up the artist's abundantly teeming private world.Thankfully absent is the self-protective irony that hobbles and trivializes so much postmodern art.For Adam A obviously prefers to commit herself fully to her unabashed painterly passion, which invests all of her compositions with intrepid intensity.- Maurice Taplinger -Gallery & Studio Magazine NY
www.antologyartadama.blogspot.com