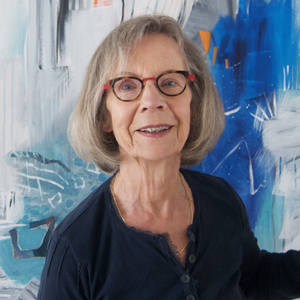 Eliane Saheurs traded one homeland of spectacular mountains for another, and found her artistic voice between ancient stability and endless change. Landscapes, variously abstracted, are her muse, and they crackle action and life. What the viewer sees is up to the viewer, as Saheurs, even at her most literal, makes no orders. Her scale and perspective fire the imagination, and only the artist’s reverence for our rugged land is indisputable.

Eliane Saheurs came to painting through an early introduction to photography, where unexpected things happen in the process of making art, and sometimes make everything better.

When a young Saheurs worked with her father in his darkroom, and later in the field and darkroom with her mineralogist/geologist husband, she would have seen how curious shapes appear on fresh prints — those small but larger-than-life echos of dust, an eyelash hair, a smudge on a lens, or a tiny, Cohen-esque crack where the light gets in. The shapes were blemishes, but a blemish can beautify, like the right scar in the right place on the right face.

Those serendipitous glitches may have later inspired Saheurs, for such shapes energetically populate her paintings. Here it is not their origin but their purpose that’s inscrutable; who knows what intent is buried in those shapes, what emotions fire those vivid colours, what desires fuels those tireless motions? You can be certain only that the shapes are busy, at times frenetic in their energy, as they spin and fly in all directions.

Saheurs was born in Thun, Switzerland. She moved to Canada — trading one homeland of spectacular mountains for another with its own backbone of rock — and eventually she found painting as her artistic voice.

She moved to Ottawa in the 1980s and began a decade of study at Algonquin College and the Ottawa School of Art. She worked with names well-known in Ottawa — Blair Sharpe, Kathy Gillis, Jeff Stellick and others — and studied with artists who hailed from New York to New Mexico to Austria to Tokyo. Her work was included in Saatchi’s “Best of 2017” catalogue. It also hangs in the City of Ottawa’s collection, and in private collections across the city’s corporate, legal, political and diplomatic offices — including, not surprisingly, the Embassy of Switzerland.

The Swiss landscape and that early photography exposure in the geologic fields with her husband made an impression on her painting as indelible as those long-ago darkroom blemishes. Landforms are the stolid foundation of her art.

One feels instinctively that her scenes a
The furors of geological forces inside the earth’s crust create new organic and geometric forms and intricate spaces. Geometrical relics of crystal symmetry emerge; volcanic eruption, weathering and fragmentation transform the rocks and minerals into new structures and mysterious landscapes; vivid colours arise from layers of oxidations and erosion.
All this led me to create a new group of paintings: Never seen spaces. Spaces with organic and geometric forms, tumults, chaos, depth, unusual tones and shimmering hues.

Open Studio Dec. 2 from 11am to 5pm
Voyageur Drive Ottawa

Solo exhibition at Galerie Bergeron, Ottawa
from August 25 to September 18, 2016