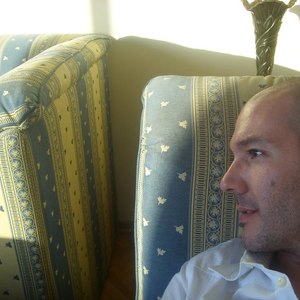 Ezequiel Barakat was born in Buenos Aires, Argentina. He studied visual arts workshops at the School of Fine Arts Prilidiano PueyrredÃ³n and various courses on Arts in cultural centers in Buenos Aires, as well as workshops in drawing and painting, art history and art appreciation in Mexico City, the country where he lived from 1998 to 2005. He developed solo and group exhibitions in Mexico City. He lived for four years in Ankara and Istanbul, Turkey, where he is working on an exhibition that will be opened during April 2013 in the contemporary art gallery "Kara" in Ankara. Since 2012, he is based in Caracas, Venezuela.

1) ARTIST'S STAMENT: Some thoughts on the exhibition's name:


I fundamentally paint and draw to express and to release thoughts and sensations I cannot express by other means. I chose the abstract language for this purpose because I consider it is the expresses the realm of freedom. Abstraction does not depend on reality to be understood, it has its own rules based on the interplay of colour, lines and space.

The reflection on the relationship between poetry and painting was the starting point of a series of works made between Buenos Aires and Istanbul in recent years. Among the questions I've raised that arises relates how the subjectivity of the poem with abstract painting. That is, to what extent the multiple meanings of the word, in its poetic function is related to abstract forms, converted into signs and how these signs, through repetition, become symbols of the painter's own world.


In this direction, poetry could be considered as a symbolic expression of a world seeking its meaning in the movement, the rotation of the signs. Abstract painting could be described in similar terms. The geometric shapes and hard lines that cross my paintings also seek to create a world, the image and likeness of the world I want to live, constantly changing.

The formal aspects of my work fall within the dynamic geometric abstraction: the idea that the signs are autonomous and that they themselves, motivated by relations of distance and location almost immanent, guide the work. As in poetry, the work acquires its meaning in the sense that it imposes the reader / viewer, and it varies from age to age.


The title of the show is based on the idea that geometric figures are in constant dialogue with the space and are both a language in itself. Rotating/Spinning is moving, moving in circles, spinning around an axis, change a land cultive by another, if we extend the meaning. If we force up to its Latin root is put something on wheels. The wheels and circles are elements present in almost all my works and are nourished by their symbolic value, as examples of the completion of what from Jungian psychology, called the Self or ultimate unity of personality, symbolized by the circle and mandalic figures.


There are two crossing lines: genesis of the world, beginning of everything, as the universe began with a stroke that is part of the mystery of creation. The line is fertilized by another vector, and vertices forming vortices.


The image is given, in the game of movement in space of the canvas or paper, life itself. Each line has a meaning only in relation to another one , to form a whole. I want to convey that autonomy of the geometric figure, which liaise with others, are possible worlds: the worlds of the Creator, that field of pure freedom, as must be Arts.