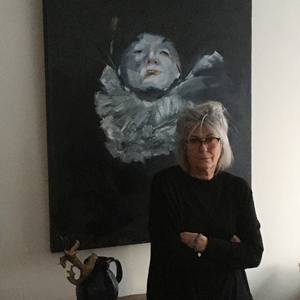 Being a portrait painter I mainly work with oil on canvas and try to give my own painting-signature to the work I make.
more information on: http://www.jacquelinehoebers.nl

graduate from the art academy in Arendonk, Belgium, I've been working on several small personal projects. One of them being about the life of Edith Piaf. Further on I work from my emotions. Trying to give a personal touch to a painting. My emotions dont have to be the same as someone else's emotions so everyone is free to put into a painting what he/she likes...
2016 - masterclass in Spain to get to know the colours and painting of the Spanish master Sorolla better..

-2017 Winner of the Picasso competition: My work: Sol LeWitt and Picasso was chosen by the professional jury out of more than 3000 works that had entered the competition.


-2014 art displays in Horst Netherlands 3 and 4 May 2014
-2014 one of my works nominated for Alphons Winter Prize. On display in Venlo (Netherlands) from 5 till 29 June 2014.
-2014 "Blindfold"on loan to museum "van Bommel van Dam"in Venlo , the Netherlands.
-2014 Nominated as finalist of the Alphons Winter prize with the work "a penny for your thoughts". This painting was on display at the "Province house"in Maastricht from November 20th 2014. It was selected from lots of other paintings...
In the end the painting was selected by the jury out of the 72 candidates as 4th best and got an honorary citation from the jury.
4 works on display at Alta Ripa in oud Turnhout in Belgium. For an impression see website: http://www.jacquelinehoebers.nl there is a small film about the exhibition.

2019- On 5 and 6 October some of my paintings will be on show at Molen van Verbeek / Gallerie TriVidha
Molenstraat 14a, 6077 BC Sint Odiliënberg as part of an art-festival at the municipality of Roerdalen, Limburg, The Netherlands

2019 - one of my paintings on show in a joint exhibition in the castle of Brueggen , Germany

2019 - one of my paintings on loan to museum Venray, the Netherlands .

2019 - exhibition in Belgium:
From 9 March 2019 - 24 March 2019 some of my works were shown in the Cultural centre "Muze" in Heusden-Zolder in Belgium. This was a joint exhibition with some other artists. Photography - sculptures and paintings could be seen there.

2018-October 6 and 7. Group exhibition at the Castle of Daelenbroeck in Herkenbosch, Netherlands. A number of works by Jacqueline could be seen here during the weekend of 6 and 7 October.


2017- exhibition winning work "Sol LeWitt and Picasso" in the Van Abbemuseum in Eindhoven ,Netherlands, from 2 May till 9 July 2017.
2017 - March . exhibition CS building - Amsterdam
2017 - publication in the first edition of "MUZE" an art magazine published by the Dutch Broadcasting Company AVRO/TROS.


2012/2014 some of my work was on display for some years at Restaurant "Chitanie" in Horst, Netherlands. Now over.

2014 exhibition with sculptor in Horst, Netherlands

2014 September till December. A number of my art works are exhibited at Alta Ripa castle in Oud Turnhout (Belgium)

2014 from the 21st of November the works "a penny for your thoughts" was nominated for the Alfred Winter Prize and was put on show at the "Provinciehuis"in Maastricht, The Netherlands. Here the painting was picked by a professional jury from the 72 finalists as 4th best and got an honorable citation.

2015 from 1st of September till half February 2016 , 9 of my works will be on loan to "woongoed"in Reuver, The Netherlands

2015. From 2 October till 18 October 3 of my works were selected by a curator to be presented at the "Terpchurch" in Urmond (The Netherlands) as a result of my 4th place in the Alphons Winters competition.

2015. I sent in one of my paintings for a van Gogh competition. It has been selected to hang in the museum in Breda for a number of weeks. This was in a van Gogh exhibition from 19 November 2015 till 16 January 2016.

2016. I entered a competition for the prestegious " Van Lanschot" award. I sent in one of my paintings "Back to black" . So far it has been selected among the 10 works which will be voted on by the general public. My work was voted as 6th by the general public so unfortunately this was not enough to be voted upon by the international expert jury. However it has been a nice experience and an honour to be 6th among the 508 works of art which were originally sent in.

-2017 - I entered a competition with my work "Sol LeWitt and Picasso" and was selected by a professional jury to be among the 25 best paintings. These were shown in the Vondelcs building in the Vondelpark in Amsterdam from 12 to 19 March.
The 25 paintings were selected out of a total of 3055 works of art.

My work was selected by a professional jury as being the best. It was chosen for its originality and powerful brushstroke. As a result the work was displayed in the Van Abbe museum in Eindhoven from 2 May till 9 July 2017.

-there was an exhibition of my work starting the 18 th of March 2017 and then for 4 weeks in Reuver-The Netherlands.
Ends 9 april