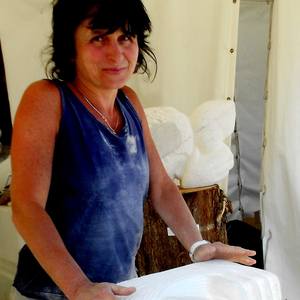 Born in Prague, 1959
My work is figurative, expressive and often narrative.
I draw my inspiration from the life and people around me.
I sketch people, watch people, listen and make up.
I use my sketchbooks as a rich reference and starting point for my work.
For many years I have been using predominantly the COLOUR
while working in clay and painting on paper.
Now I work mostly in limestone ( Bath, Portland, Cotswold, Caen ).
I am more focused on the FORM, utilizing my knowledge of anatomy.
One of the most fascinating aspects of working in stone is its
nakedness and the presence of ancient past within.
The absence of strong colour forces me to simplify my artistic language.
It makes me concentrate on what is important and significant.
It gives me an angle I wish to apply to my way of living, too.
At present time I am in the second year of Stone Masonry Course at
City of bath College. I work from my studio at Blaise Castle Stables, Bristol.