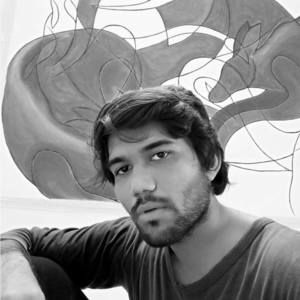 Work of art can act as a mirror. A mirror which can unmask the unreal and provide with an opportunity to see with a new perspective - Kabir.

Kabir was born in Vadodara, Gujarat. He aspired being an artist since his early childhood. Hindu mythology and Indian history are the sources of his interest for visualisations. After graduating from high school, he pursued architecture interior course at CEPT University, Ahmedabad. Spending three years into the course made him realise that the field is much more inclined towards practicality as well as technical and structural aspects. The viewer could look beyond the visible and see the value of efforts and process behind an artwork. This understanding, as Kabir thinks, is a fruit of the design education. Pastels, charcoal, acrylic and oil colours are majorly his mediums to work with since they help the creations to be more transitory. His drawings and paintings are available and can be found on Saatchiart.

His current series called 'The Sikar'. The series is inspired from early Indian art forms. The series is thought to explore and revisit early subjects and artforms of India such as animal hunting. The Sikar series is a continuation of a similar subject with a new approach and style. The artworks are thought to help the viewer comprehend the subjects with a new perspective. The art can play the role of a mirror reflecting the hidden reality of today's society. The colour palette used is drawn from the Indian culture mostly comprising of the shades of brown and red.

2020 - September 17th - October 2nd - Virtual Art Residency - Mental Health: Everybody Deserves to Have Their Story Heard - by Art for Change Foundation and The Lighthouse Experiment