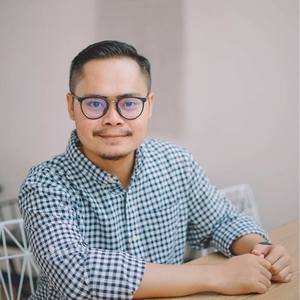 Fiman Prayudi Utama, born in Bandung, Indonesia 30 years ago is the second kid in the family, and grew up like most other kids. Since the age of 5 he has shown interest in the world of art, not only drawing, he has also joined drama classes in kindergarten and appeared on TV station.
He showed interest in the art world and competed in various painting and drawing competitions. Fiman began to improve his skill as he dreamed of becoming a professional artist in the future. He also began to build character in art, starting with caricatures at the age of 16 and surreal art since 2009. The combination of styles and technology called "la Magia del Colore", in Italian languange means “The magic of Color”. Contrast in color and irregular lines begin to become his trademark. His first work as "la Magia del Colore" titled 'Deep in the sea' that shows us a beautiful mermaid in the colorful sea. World peace, love, nature, culture, prosperity, even dreams. Through "la magia del colore", he wants to talk about the things around us through beautiful visual combination.