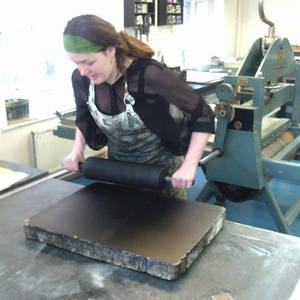 I have recently completed a BA in Art, specialising in Stone Lithography, at Aberystwyth's School of Art.

The process of printing onto stone is seductive, elusive, and difficult. In the difficulty of mastering the technique lies a wealth of mystery: uncontrollable elements and contradictory chemistry collide to produce curious results.
In this next year, I plan to investigate two unique methods of creating lithographs: soap wash and acid tint.
These experimental approaches feed into my painting practice also: I explore ways of creating texture and layering.
I desire to capture the sense of landscapes, using sketches made in situ. The memories and senses permeate into the painting.