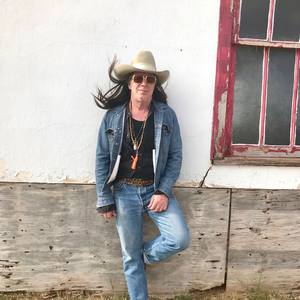 born in Apache Jct. Arizona , Hobley began exploring painting as a means of expression at a very early age , he found the mystical quality of life in the desert deeply inspirational .
At 18 , he had his first gallery showing in scottsdale , Az. . drawing much attention from newspapers , local critics , corporate and private collectors alike ... this was to be the launching pad for a long career as an artist .
Throughout the 1980's Hobley began showing his work nationally . In 1991 he moved to venice , Ca. where he now lives and works ... As a result of moving to the Los Angeles area Hobley's vision has been embraced by collectors world wide as well as the commercial , television and motion picture industry . Always thought provoking , hobley's work has been aptly described as cultural samplers , that convey the primitive as well as the pixel . the painting's poetry is buckshot story telling ... it aims at no one but hits us all .

primarily self -taught , with the odd course thrown in , when ever i needed technical information . Art School seemed like a step backwards .