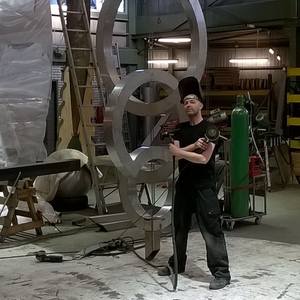 Marko de Kok (1969) is a Dutch artist who creates geo-symmetric abstract sculptures. Starting as an interior-designer, he developed and pushed his creations more and more towards a monumental and abstract level, until a few years ago he took the final step by fully releasing 'function' and only focus on 'form'.
De Kok’s works arises from a desire for simplicity and perfection, for unity and beauty without restraint, in a time where fragmentation, discord and a multitude of choices easily do obscure the view. Therefor all his sculptures consist of one continuously line as a symbol of clearity, timelessness and the cycle of life and death, solid by choice of material and unapproachable by choice of finishing.

The sculptures represent the individual’s longing for a balance between a strong, independent position in society on the one hand, and being part of a coherent, social community on the other. The tension evoked by this polarity is shown by this sole line creating its own emptiness, but this very same space is largely responsible for the identity of the sculpture as a whole.
De Kok’s goal is to offer the spectator not only solid grip and peace of mind on this matter, but also a joyful experience exploring the sculptures' appearances, for as in many cases in life the perception of the viewer depends very much on the position in which he finds himself.