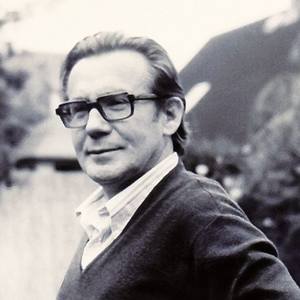 Arthur Meyer zu Kueingdorf was born in 1920 in a small town named Kueingdorf in northwest germany. As one of 5 sons of a farmer.

In 1946, the Landeskunstschule (College of Fine Arts) in Hamburg reopened after the Second World War. Among the first students to enrol were Horst Janssen, Paul Wunderlich and Arthur Meyer zu Kueingdorf — whose extraordinary artistic and technical talents, which had become apparent early on, helped paved the way.

Art was his life. He always defined himself as a classic European artist in the tradition of the French Impressionists.

He drew and painted at his parent's estate in Kueingdorf, later in Crete as a soldier, then in Hamburg where he recorded experiences during his studies in hundreds of sketches, then in Westphalia, which became his home — but also in Spain, France, Italy, Greece, the Netherlands, Denmark, Norway, Sweden, America, and Canada — and, of course, in Germany, on the Moselle, on the Baltic and North Seas, in the moors of Worpswede and the hills of Lipperland.

Arthur Meyer zu Kueingdorf was always in search of the image, the motif that he could dedicate his whole attention to. Clearly, focused, and always with a bold brushstroke. His very individual view of reality was coherent and free of emotionalism. He was a true painter, alone with nature.

Together with his wife, Lisa Meyer zu Kueingdorf, who was also an artist, a picture weaver, he lived in Bad Oeynhausen during his productive creative phase from 1952 to 2002, first in an old town villa and from 1976 in an old farm on the outskirts of the town, which also served as a gallery.

Handmade - step by step - the production process: First, Arthur Meyer zu Kueingdorf sawed the hardboard to the desired dimensions. He then coated the board with a natural glue and old linen, previously cut to size and still produced on handlooms, was glued to the hardboard, also glued in again and tensioned. After about 48 hours drying time he could use the canvases. He liquefied the paints, dry, high-intensity powder paints, with a fresh egg yolk mixture, mixed them on the, slightly sloping, glass plate of a typical easel and then applied them to the canvas stretched in the easel. Since the paints dried quickly, his artistic process was characterized by speed. A sure stroke and 'painting from the depths' allowed the pictures to emerge - from the ground the forms gradually formed out of the surface. AMZK used relatively hard bristle brushes for the specific application of paint. He usually used black photos that he had taken himself as a motif template.

Excellent education on the Hamburger Kunstakademie from 1948 - 1952 together with Horst Janssen and Paul Wunderlich.

- 60 years of creative work.
- More than 4000 pictures. Egg tempra and watercolors.
- More than 75% of his oevre was sold during lifetime.
- A life of dedication and passion for the arts.
- Paintings from all over europe.
- The family, with three kids, lived over 50 years from the income of his inspiration and talent.

From the mid-1950s until the year 2000, there were 2 - 4 exhibitions per year, with a focus on North Rhine-Westphalia, in places like Bad Oeynhausen, Minden, Bielefeld, Detmold, Herford, Melle, Osnabrück, Rinteln and also in mid and southern Germany, such as Bad Kissingen, Bad Solingen, Baden-Baden etc. pp