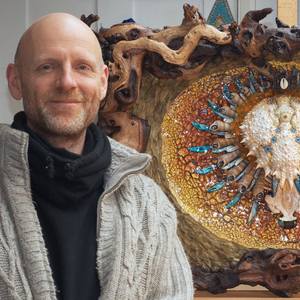 "My vision of life is one of wonder and awe. Colourful, deep, and endlessly interesting if you have the curiosity and courage to look from unusual angles, and it is to be lived and loved as fully as you can."

Born in Australia and schooled in Nigeria, Scotland and England, adventure and travel have always featured in Ben’s life. He searched for inspiration and escape from the mundane through extensive periods of travelling, with extreme sports and extreme partying featuring prominently. He funded this, after art college, by first working as an architectural model-maker, working on many high profile projects including The Millenium Dome, Tate Modern, The V&A Museum extension, and the Sydney Olympic Stadium. As the new and emerging CGI (computer generated imagery) software began taking over the industry, he relearnt his trade and became a 3D artist. He lived the high life in London and New York, working on high profile advertising campaigns and after a few years, became a Director of CGI company.

But after twenty years of working on and creating other people’s visual ideas, and despite being at the top of his game, he realised that something important was missing. He quit, and the adventurous spirit that had always been part of him took him on an extraordinary journey of self-discovery to reignite his personal creative vision. On the way he found Nature to be his greatest teacher, and has undergone a number of initiations into indigenous traditions, studied meditation and Taoist arts. This shows in the way he incorporates different and often natural elements, such as feathers, bones, seeds and wood, into sculptural paintings and works representing the preciousness and sacredness of each moment. Mometo is a name given to Ben in the African spiritual tradition of Bwiti. He continues to return to Gabon when he can, learning the music and culture of this tradition.

He lives in a magical Dartmoor forest, spending time in the woods every day. But despite his best efforts to live a quiet life, he can still be found dancing or DJing at parties and festivals or doing strange spiritual ceremonies, usually in a jungle somewhere far away.