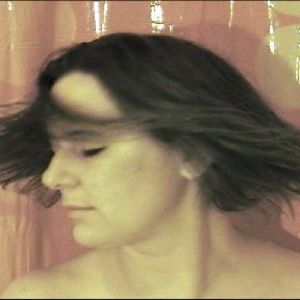 I am a conceptual artist, I draw, paint, create videos and installations, according to the ideas I need to express.

Studies in the National School for Visual Arts In Mexico City(ENAP). From 1989 to 1991 lives in Paris and studies Art History in the Sorbonne University, Paris V (specializes in Egyptian History). Makes one women shows with Artco Gallery in France and Switzerland and continues art studies at the atelier Luis Ansa. In 1994 I earned a scholarship from the Mexican Fund for the Arts (Fonca), and went to El Cairo to study the link between human figure and sacred animals in ancient Egypt. In 1998 I lived in New York and studied video and installation. I have various one women shows: 1994 "Cheval de feu", Artco Gallery in Paris, 2001 "La vie en rose", Nina Menocal Gallery in Mexico City, 2002 "La Espera", Praxis Gallery in Mexico City. The installation "Quin me habita" in The Chopo Museum, Mexico City. I received an Honorific Mention in the XII Tamayo Biennal. I have been in more than 30 group shows in Mexico, Germany, France, Spain and USA. Shows like "Creacin en movimiento" Carrillo Gil Museum in Mexico City(1995), "Deriva Mental" in the Tamayo Museum for Contemporary Art curated by Tatiana Cuevas(2004). "Come closer" in the Kunstlerhaus Bethanien in Berlin, curated by Paola Santoscoy(2004). "Altar Girls" in the Americas Museum in Denver Colorado(2006). I participated in the 2006 Video Dumbo Festival in New York City, in "True Fantasies" curated by Ximena Cuevas in The Telaviv Contemporary Art Center,in the First International Video Performance Festival in Mexico City,in the IV International Biennal of Standarts in Tijuana, in the XII Tamayo Biennal, in the 2005 and 2006 WTC Art Fest Contest in Mexico City, in the X Diego Rivera drawing Biennal, in the First and the Third Yucatan Biennal, in the video Show "Imgenes multimedia de un mundo complejo" at the Sala Santa Ins in Sevilla(2008). In 2003 my video installation "The Call" received an award from the New York curator David Ross, trough The National Council of the Arts in Mexico (CONACULTA). "The Call" was shown in the San Ildefonso Museum in Mexico City. Now I am currently working in the "Floating Women Series" made of digital photos, videos and drawings.,

Future Shows: One woman show at the Front Ground Gallery in Yucatn, Mexico.