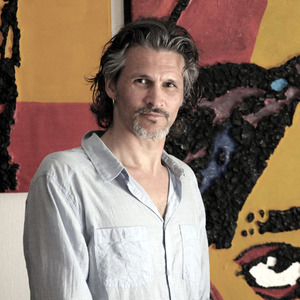 I advice you to visit my website www.fauserpaints.com
just because you get a better impression of my art work. It ain't flat, it's kinda 3-D-ish. On the website you can see my works from different angles and really find out, what it's all about. Thank you

Born in July 1965 in Loerrach (Baden) near the Black Forest and next to Basel, Switzerland. Single father of two sons, now grown up. Lived in New York, Los Angeles, London, San Francisco, Milan between 1987 - 1995. Toured Europe with Musicals after that. Based in Hamburg, then Cologne. Worked for TV and am the singer/ songwriter of "The Moonchildren". Back in the Black Forest now. Active member of the art scene in Basel.
CD-Release: Feel, The Moonchildren. Art&Music-Box Deluxe.