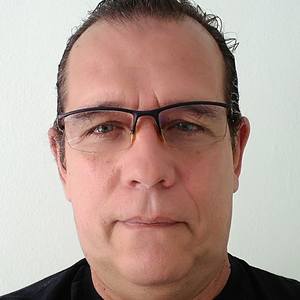 Brazilian from Rio de Janeiro. Currently living in the state of Paraíba.

I started studying painting and drawing at the age of eight at Brazilian Society of Fine Arts with Professor Antenor Finatti, a painter of pier and marine scenes. His paintings with strong tones, lines marking the contours and wide areas of thick paint were my first references.
At the age of twelve I discovered modern painting and its movements. The Impressionists, Surrealism, and especially Cubism came to exert great influence on me at that time. Picasso, Miró, Klee, Braque became my references, specially Klee and his watercolor paintings.
From 1977 to 1979 I turned back to study drawing at “Brazilian Society of Fine Arts”.
From a 1977 drawing, entitled "The Painter Dressed as Harlequin", a character called "The Painter" or just "The Character" is born, and it would become an alter ego through which I would start a research on the line itself and the describing of my emotional and energetic states. In this line of research there is a kind of automatic writing - which I call "Caligramas" - that became part of my drawings, adding new layers of meaning and dialoguing with the main figures.

The works of this period are basically drawings in China ink, some watercolor and oil paintings. In the following two years I took part in my first art exhibitions.

At the age of 25 I joined the painting course at “School of Visual Arts of Parque Lage” with Professor Charles Watson, who would become my main teacher in this period. In class we were led through a series of strategies to make us aware of our vices of painting. The first days of class were intended to teach us how to make a chassis from scratch. Not by chance, during the course of that year, I finally understood pictorial space as something that is constructed.
Encouraged by the texts given in the course, by the discovery of new artists and by my teacher's own line of work, small painted sculptures made of wood and then larger sculptures came up.
With the painting “Solid State”, a new figuration begins, focused on the construction of the pictorial space through the use of basic forms of drawing. This figuration began to reflect on the wooden objects, the sculptures and the overlapping planes of the assemblages.
Artists such as Frank Stela, Kurt Schwitters, Philip Guston have become important references contributing to the conception of this idea of a constructed space that goes beyond the canvas surface.
There were six years of “Parque Lage” studies, several collective exhibitions and three individual exhibitions. The production of this time transited between acrylic on canvas, Styrofoam sculptures, wood sculptures and assemblages.

In 1992 I had my last solo exhibition in the Small Gallery of “Candido Mendes Cultural Center” at Praça XV - Rio de Janeiro, called "Retrospective 1984 - 1993".
The painting continued to be important, and I would take it up one day.
From 2013 I began to experiment with digital painting, and in 2016 I enrolled in a course on art criticism at “Hélio Oiticica Municipal Arts Center”, as a way to get closer to the artistic discussion and to turn my eyes to my own work.
What issues in my work remain relevant today? What is still relevant to me? Relevant enough to make me paint again?
My recent work is an attempt to figure these questions out. They go through issues related to painting and sculpture and what happens when the border between these two practices begins to break. Sometimes the drawing leaves the canvas and ends up being concretized as sculpture. On the other hand, my interest in the digital manipulation of images, led me to work on photos of objects I construct, making the reverse course, when an object or sculpture is taken inside a two-dimensional holder and turns paintwork.
The dialogue between these spaces, pictorial and sculptural, allows me to continue investigating questions that interested me in my previous works and to discover their possible unfolding in the present moment.

1990 - Attends to the course “THE TALK ABOUT ART” at the ESCOLA DE ARTES VISUAIS do PARQUE LAGE Prof. Reynaldo Roels Jr.

1987 - Attends to the Painting Nucleus of the ESCOLA DE ARTES VISUAIS do PARQUE LAGE.

1991 - Invited by the "CENTRO CULTURAL CANDIDO MENDES- RJ" to accomplish the painting of a permanent site specific mural called ORGANOMAQUINICS in the building of the "FACULDADE CANDIDO MENDES DE IPANEMA" – RJ.

2017 - "CARPINTARIA PARA TODOS" in the gallery CARPINTARIA - RJ.
with the interactive installation "DMN - Negative Energy Demagnetizer" and also with the performance "BEYOND THE BODY".