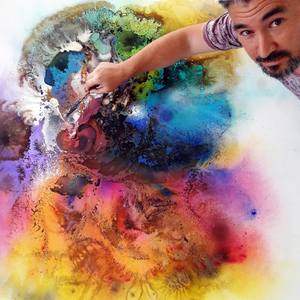 Orkun Boragan was born on March 24, 1983 in Ankara, Turkey. His family originally is Crimean Tatars, emigrated from Crimea to Turkey in 50s. In his paintings, he is impressed by Cirmea and Anatolia culture.

Considering the paintings of Orkun Boragan, one can easily notice the fact that he raises many questions to those glancing at his workings. The difference between creating and painting makes itself exhibited at the time of getting involved with the painting. The uneasiness’s inside the artist, his ties between the individual and society, the reflection of these to the societal life, we can get to a synthesis through internalising the discrepancies emerging by the time. In his works, he proceeds from the thought of ‘inexperienced lives’ as his initial point. He strives to describe beyond the day after tomorrow of the missing dreams of people before their eyes; hopes, expectations so far from realising and wishes seemingly impossible to be accommodated. In his paintings, the thought has become distinguished that ‘the art is unique to, for and made by human’.

Within the course of the creation, Orkun Boragan attaches himself to the view to place human to the front of the life and puts democratic elements right into the centre of the administration.

In his works, one can see the self-components of the entireness within. The entireness composed out of these components can also be observed. That teaches us view holistically. It is the term of new world realised on the basis of the abstractedness of the material and tempus; the abstract cosmos. His aim is to draw the design of abstract and relate the abstract – proceeding from pure energy – by generating new arrangements through microbiologic forms.

Following his high school education, he was graduated from the faculty of Fine Arts of the University of Izmir Dokuz Eylül in 2004. In 2008, he studied M.A. Degree in Painting at the South Ukrainian National Pedagogical State University in Odessa, Ukraine. As of 2008, he has composed his workings at his art atelier and participated in national and international karma exhibitions since then.

Some of his exhibitions: