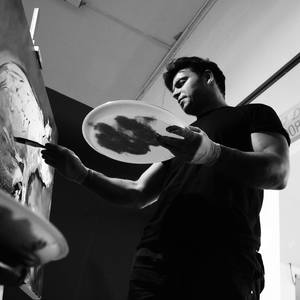 Papari Alessandro was born in Naples in 1971

After studying painting at the Academy of Fine Arts in his hometown , he began to exhibit in 1991.
Held in 1998, the first solo exhibition at Art Space Gallery in Naples.
The following year a new staff sees him at the Institut FranÃ§ais in Naples, also participates in the Prix Lefranc Bourgeois , Milan and Paris , and won the second prize in the Prix Morlotti , Imbersago .
In 2000 he again took part in the Award Morlotti , Imbersago , and is a finalist for the Prix Donato Frisia , Merate .
There are two personal in 2001 at the Art Space Gallery in Naples and the City Hall of Imbersago . It is also present in the exhibition " Match" at the Gallery Russian in Rome.
A new staff , the gallery Brambati Vaprio d'Adda , opened in 2002 , it followed the holdings in the exhibition " We", promoted by the Sun in Naples and Urban Institut FranÃ§ais , and the Award Morlotti , Imbersago where he won first prize . Also participates in the fif

ty-third edition of the Premio Michetti , Francavilla al Mare.
After exhibiting in 2003 in "Korea - Italy" at the Arts Center in Daegu , South Korea , the next year is the second edition of the same event, and also the Award Ferruccio Ferrazzi , Sabaudia , the Premio Termoli , the City Award Busto Arsizio and the Award Liss , where he obtained the 2nd prize estimate classif .
In 2004 he also participates in the exhibition of the winners of the Morlotti , Imbersago , and the show " The feeling of the art" in the Palazzo Islanders , Bologna.
In 2005 , before the staff at Ta Matete in Rome , is present at the Prize Razzano at the Museo del Sannio in Benevento and the Premio Termoli.
It also participates in the exhibition " Figures ," Central State Archives , Rome.
In 2006 he was present at the exhibition " Classical Rome " , the National Library , Rome, and in the exhibition " Harmony Figurative ," the palace Marigliano , Naples.
In 2007 he participated in the exhibition " Visions from Italy" , Gallery 27, Cork Street , Mayfair - London .
In 2008 award Sulmona , where he was awarded .
In 2009, Giorgio Seveso his care at the Galleria Art Space in Milan.
In 2009 award Sulmona.
In 2009 he took part in the exhibition " Opening" at the gallery " Art In Formo f " .
In 2010 the collection " Plough " , an exhibition of painting.
In 2010 participates in the exhibition "4" , Gallery In Form of Art
In 2010, " The road contemporary art ," with the Changing Role Gallery , exhibition.
In 2010 Giovanni Cerri, Alessandro Papari , in "Visions " , double staff , Art Space Gallery , Milan.
In 2010 , " Excellencies ," personal " BLESSED " , Alexander Papari with the Changing Role Gallery , Naples.
In 2011 , Attendance at the 54 edition of the Venice Biennale , " Hall Academy " curated by Vittorio Sgarbi.
In 2011 staff , " Blessed " at the Changing Role Move Over Gallery, Naples.
In 2011 , "It's time to say goodbye ," in Palazzo " Zenobius, Venice.
In 2012, premio Vasto , curated by Carlo Fabrizio Carli ;
In 2012, " Nina ", a new image Neapolitan museum Pan ,
Naples. In 2013, " Revelations of the body," Space Zero 11
In 2013 staff "Fire -eaters , jugglers and other (Super ) Heroes .. " at Liquid art gallery system , Studio Lab , Capri.
In 2013 , staff " Strange" , Banca Popolare del Mediterraneo, Naples .In 2014, International art symposium: atelier an der Donau , Austria
In 2014, Exhibition of contemporary art: south of thought, features Mediterranean-Italy
In 2015 "Artlante Vesuviano" memory and presence in contemporary languages;
In 2015, "Dispersionis" Co.r.e Gallery Contemporary Art. Naples;
In 2016 personal "Urban Immersion" at LM Gallery, Latina.
2016 "The Silk Road - contemporary art" between East and West, Castel dell'Ovo, Naples.
2017 "Art-Performing-Festival" II edition, Castel dell'Ovo, Naples.
2017 "Edentification" Serio gallery, Naples;
2017 "Mestre City Painting Prize", special mension;
2018 "City of" Pan Museum of Naples.

He lives in Naples.

He was born in 1971 in Naples where he lives and works. A boy, he feels the desire to express himself through the colors and the graphic sign, this passion intensifies with time, leading him later, to enroll at the art institute and then at the Academy of Fine Arts. In those years, such institutions will not offer the specific knowledge of the profession, as it was once, in the studios of the painters of the past, therefore, true formation takes place autonomously. Certainly, some figures, teachers have consolidated in him the will to continue despite the adversity, sending him the desire to affirm, Geneva Rizzuto was one of the first people to firmly believe in him, a lab teacher, severe and passionate, stimulating him On the way to the academy. To the fine arts, in the figure of master Armando De Stefano, famous painter Campano, figurative plant, who will guide him to the exercise of the design from true and freedom of expression without rigid and academic facilities. The years to come, they see him looking for autonomous language, difficult years for painting, considered dead language. The first statements take place at the end of the 90s, when winning the 2nd place at the Morlotti Prize in 1999, with the painting "Tram" split in the chaotic urban life, squeezes the will to engage in the affirmation of his language. At that time, there are contaminations arising from the figurative painting of some Parthenopean authors of post - war figuration, and echoes of international expressionism, drawn from American painting of the 1930s and 1940s. In 2002 the real breakthrough takes place in the 1st place at Morlotti and at the same time is invited to participate in the Michetti Prize, one of the most prestigious awards of those years; Fortune is benevolent as it will also be hired to be part of the Tamatete project team exclusively, thus having the chance to live in art for some years. The years to come will be marked by the desire to highlight his pictorial research, always driven towards new insights, in 2004 he is the guest of the Lissone prize, where he obtains the "first prize award" by the jury, reconfirming the will to continue Towards existential issues; The domestic interior seen as a container of the lived, becomes a stage of metaphysical situations; At that time the subjects who populate his canvases are predominantly isolated figures, always caught in unlikely situations.
The woman who comes out of the fridge, a metaphor of contemporary aesthetics, will be one of the most characterizing subjects of that period, seductively criticizing and public; Is invited to various exhibition appointments. Moreover, even the urban landscape will take a prominent role in its research, there is the will to tell its periphery, those not so anonymous places that had marked its life in the juvenile period. 2005 is marked by another appointment, the staff titled "Philip Dick in Bagnoli", at Tamatete in Rome, curated by Flaminio Gualdoni, an exhibition that collects 40 selected works of the last few years, a thematic journey in his beloved themes . In the following years his production began to move to a meticulous language, his painting, which originally was characterized by urban themes and home environments, is directed towards more intimate images, the Flemish landscape is always present, now with the coexistence of New elements; The human figure becomes more evanescent and dynamic, sometimes it is almost "ghosts" that materialize in the architectural fabric of the scene.
In 2007, he participated in the exhibition "Visions from Italy" in London, the works of choice, made of contrasts, cold tints with warm accents, evanescenze that show the presence of wet contrasted with figures dressed in winter clothes, capture the attention of users.
The following year, he is rewarded at the Sulmona Prize, another historic event that aims to consolidate his path to a new staff in Milan under the title "Missing". It includes works referring to the Flegrean coast, and in particular to "Nisida", a volcano island inspired by writers and artists. T