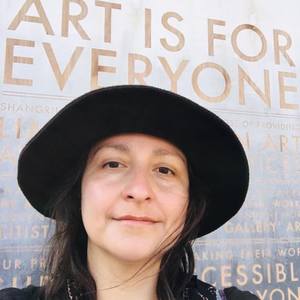 A sense of uncertainty and continuing self questioning drives my daily practice. Nothing ever feels certain in the process of painting, and this uncertainty drove me to paint through the ever-changing symbolism of water.

A lot of my paintings start from painting on the floor; through the plasticity of the paints and mediums. Water or air emerge from the simple action of making a mark on the canvas. Other paintings are inspired by both my own photography and online images, which I alter digitally, both before and during the process of painting.

Through my work, I aim to invoke a sense of the sublime.

Visual Arts at the National School of Arts (ENAP), part of the National Autonomous University of Mexico (UNAM).