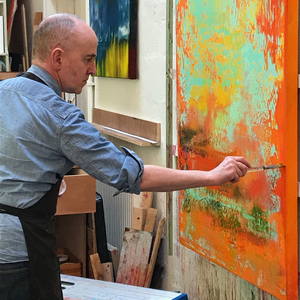 In my practice I work primarily as an abstract artist, exploring pure colour and form, the substance of paint and ground, and the tensions between the physical processes of making and the ‘life’ in the piece. I strive to create paintings with presence, paintings which have atmosphere and countenance.

For the last few years I have been working in a beautiful light filled studio in Sussex, England exploring tools and processes which disguise the hand. I have found a greater freedom through this limitation and its challenges. I explore light and darkness and pure colour journeys, working with transparency and glazing to create vibrant surfaces.

My paintings were selected for the ING Discerning Eye exhibition at the Mall Galleries, London in 2015 & 2016. In 2017 my work was selected for the prestigious Creekside Open & the National Open Art Competition.

My work is currently on show at Clifton Fine Art in Bristol, at the Melford Gallery in Mayfield and at Silson Contemporary in Harrogate.