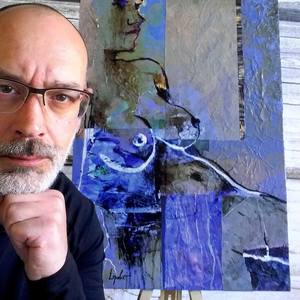 Robert Andler-Lipski is UK based visual artist experimenting with a wide range of mediums and materials.
In his work he seamlessly blends figurative subjects with abstract forms as a complexity and apparent chaos simultaneously with a harmony and simplicity.
His individual style is often characterized as a specific mixture of modern Fauvism, neo-Expressionism and Abstract. However, as the artist says, there is no any particular style that he could apply to or link with his creative work:
"(...) periodically I am more or less influenced by some particular art movements, tendencies or styles, also by some artists. But this drift is the same way absolutely natural as constantly changing during my creative work".

Robert Andler-Lipski born in 1968. Studied Methodology of Arts and Philosophy. Completed Decorative Tapestry Weaving and Artistic Mosaic master courses.
He was early introduced to the nature inspired figurative and abstract painting, drawing and printmaking.
Although that his artistic journey began in late 80's, he worked as a fine arts teacher, journalist, graphic designer and creative consultant simultaneously. However, some day in the mid of 2013 he decided to devote himself exclusively to the artistic career. And, as he stated a few years after, it was the best decision ever made.

Robert Andler-Lipski is a committed artist of a deep humanistic frame of mind and exceptionally individualistic sensitivity. Generally understanding of nature along with a poetry, music, elusive emotions - both commonly considered as a good ones and those bad ones, impressions created by them in a frames of floating time, also the beauty of the human’s body are the main inspirations for his creativity.

His artworks are included in private and institutional collections worldwide in over 20 countries.
Also, he is an author of three poetry books and editor of number of artistic publications.

November 2020 - For Your Eyes Only - individual exhibition at Frederick Street Gallery, Sunderland, UK

November 2020 - For Your Eyes Only - individual exhibition at Frederick Street Gallery, Sunderland, UK