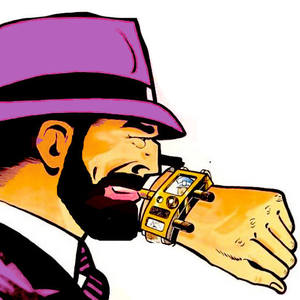 "I SAW THE FUTURE OF ENTERTAINMENT. ONE WHERE ACTORS WERE NOT WHAT THEY SEEMED BUT IMAGES MAPPED OVER BODIES. CELEBRITIES OF THE TWENTY FIRST CENTURY WERE VIEWED AS MERE COURT JESTERS- BECOMING JOKES AND PARODIES OF WHAT THEY ONCE STOOD FOR. BRASH SATIRES WERE MADE- MOCKING AND REWRITING THE RIDICULOUS CULT OF THE CELEBRITY THAT ONCE WAS HOLLYWOOD...' -Excerpt from Bridget Chase's Journal, 1944-

Bridget Chase was an author, artist, and clone. He was born in 1934 and died in 1944. Bridget was a clone of Redhat Dick and was created- fully grown- in a underground scientific laboratory in France.

By all accounts Bridget Chase was a villain. From robbery, to kidnapping, and theft of all kinds; he seemed to never find satisfaction in following rules. Dr. Stan Fantastic, Bridget's psychiatrist, deemed his activity as one born of a troubled mind.

In Dr. Fantastic's own words, "How could one blame Bridget? To be born a clone must, by all accounts, be a terrible tragedy. To not be original, a sovereign individual; well, the country itself should be held accountable. For it was shown in the case of Natalie Hotdayum, that clones are doomed from their very creation."

Bridget Chase did find some peace of mind in creating art and writing. His books are vast and follow similar patterns to his counterpart Redhat Dick featuring qualities such as weird sensibilities, bizarre story lines, and misogynistic over tones.

Bridget Chase was sought after for the death of Redhat Dick in 1943. Redhat Dick was found frozen on the snowy banks of eastern Pennsylvania. Bridget was never convicted but family and friends were never convinced of his innocence.

Bridget Chase died the following year in just as questionable of circumstances. His body was discovered in the bushes of a vacant home in Pennsylvania. The only clue being a note in his jacket pocket from an unknown entity calling themselves Instant Bunny. The note included an invitation along with a six digit number.