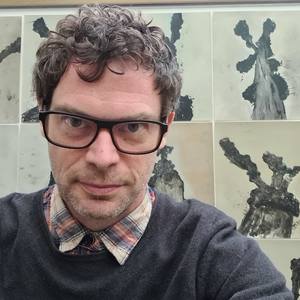 He is continually interested in the self-inflicted demise Mankind faces within our Anthropocene era & our behaviour within it. Although the outlook here is perpetually fearful & pessimistic he tries to create a contrary world of destruction, beauty & fatalistic humour, where journey, travel & time, change, metaphysics, erasure, air & light are all of critical importance; but also where the relationships between Landscape, Living Things & Humanity are paramount.

He is presently engaged in an ongoing project called the Tree Portraits which is made up of of over 200 Monoprints, some of which were exhibited as multiples in ” The Tree Portraits I” for both Art Number 23 ‘New Era’, & the Woolwich Contemporary Print Fair Online Edition in late 2020. These were derived from site specific photos taken near his previous home in East London & moved in to Print using Gelliplates.

This has followed on from originally finding huge flexibility in working with this new method (without requiring a Printing Press of any kind), which has allowed him to Print in situ when travelling to USA, Spain & Portugal, & gave an immediacy to observing the Landscape around him
They evolved from a simple engagement with his surroundings to more deeper conversations about Man’s place in Nature, & how He has forgotten to connect & truly engage with It, through the the current Tree Portraits Series.

Stewart previously was a keyholder at East London Printmakers for over a decade (where he remains a Member), where he was Project Leader of the Mile End – Copperfield Road Studio Build for their successful move from London Fields, & during his time there worked exclusively using Silkscreen.

After graduating in Fine Art at Farnham in ’94 he moved to Artichoke Print Workshop until 2001, where he specialised in Photo Etching.

Stewart has exhibited regularly at the Affordable Art Fairs since it’s inception in 1999, and at the aforementioned Woolwich Contemporary Print Fair, the RA Summer Show & the National Original Print Show, where he won the Great Art Prize in 2018.