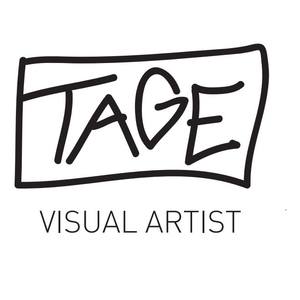 Tage has several years of education in visual arts, thereof 5 years at the art academy in Oslo.

Participating in Saatchi art's/theotherartfair in Los Angeles was to be be his first showcase abroad, not counting a number of 11 paintings commissioned by Royal Carribbean Cruise Lines.


The last three or fourth year at the academy I gained a good relationship with Knut Rose. I remember one thing he said; "It is rare that a painting gets any worse the more you work on it".

Well as long you don't destroy it ?

During my 5 years at the art academy my class painted from live models at least two days a week. One of the models (then in her late years) was in fact one of Edvard Munch's models when she was young.

I guess that very few living artists have had the experience of painting one of Edvard Munch's models :-)


Tage's works have been bought by art collectors, public institutions and private companies such as Manda Capital that by now has an inventory of more than 20 of Tage works. Furthermore his professor Knut Rose commissioned a portrait that was executed during several sittings in the masters studio in Bygdøy near Oslo.

Tage's main gallerist for many years was Bernt Hellum who sold several of Tage's paintings and also staged a sold out exhibition of the polish native artist Ryszard Warsinsky on one occasion.
He had so many creative ideas and initiatives.

For Tage each painting is a new project and is treated as such. - I see no reason to repeat myself painting after painting he states. Therefore it is quite rare that two artworks are identically executed. So even if different in style and execution, his artistic DNA appeares to be intact throughout his production.

"Tage takes base in certain abstract expressions as suggested by Professor Knut Rose at the Academy in Oslo. Instead of to condense and concretize the abstract elements in the direction of a figurative motif, Fredheim allows purely painterly elements continue to dominate the creative process, much like Edvard Munch in his most expressionistic works. This creates a slide into a new domain of painting and a further progress toward a freer expression - he struggles to keep the images open to new directions and meanings. This creates the space for a new kind of aesthetic that, according to himself, are more distinctive and less conventional. The result ends with paintings that work by virtue of itself, not on the basis of rigid conventions or external references.
The works can be viewed individually or in conjunction. Grouping images side by side also creates an interesting interaction between the basic timbre of the individual works.
In some paintings Tage lays geometric structures or landscape features in bottom before paint coats are applied, often in 20 to 30 transparent layers in a single image. In these works there is a dynamic between the previous ideas and the wider movement which acts as a structural model.
Distinct characteristics of the artist's paintings are texture and coloration - an end result of simple but thoughtful paint application and structures suggested in the abstract motifs".
Text: Hilde Hernes, art historian, Oslo. (Courtesy Gallery Harald Kjeldaas) .