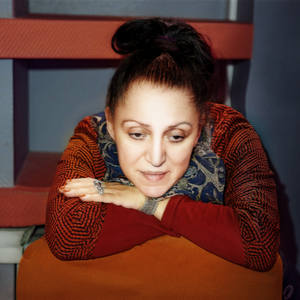 I was born in Georgia /the former USSR /, in Tbilisi. My life has been full of adventures and interesting stories. I began making artdolls and puppets when I was 25 years old and paintings after one strange night when I suddenly died while my sleep and then was returned by an unknown lady.. who came up to me through the door and helped. (who knows, who she was? )
A week later I got ill. I was very hot, when I got up and began seeking for a cardboard to make a painting. I was twenty seven years old then..
Many years passed after that.Now I am author of about 600 paintings.
In 1975 I finished music school (8 classes, the piano),In 1976 - secondary school number 66, in 1983 graduated from the Politechnical Institute as an engineer, In Georgia). I had worked as a professional engineer before my fortune turned round and heard the voice of my heart..I had already been an author of 3 plays, not so many poems (unpublished, but used in our marionette performances) .. In 1990 I founded marionette theatre "The Sky Of Tbilisi".
Puppets-marionettes and paintings have continued my life together..

1985- am a drama studio art director and scenographer;
1987- began making puppets;
1987- began painting;
1998-wrote play "Nostalgia" for my performance with puppets-marionettes;
1990-founded The marionette theatre "The Sky Of Tbilisi" (sponsor "Kartli Bank") in Tbilisi;
1992- the premier of "Nostalgia"; am author of the whole performance, including puppets and decorations);
1994-Participant of the Georgian artists Art Exhibition in the Georgian Embassy in Moscow (organizer-Rusudan Andronikashvili, the Georgian culture specialist and ambassador).

The Georgian TV reports about our performance;
Preparing for the tour to Sankt-Petersburgh to the Tovstonogov State Drama Theatre;
The war in Abkhazia began;
1994-moved in Russia and with Sergey renewed our "Nostalgia" and made a new performance "Stoletnik" by Kuprin. Now have many screenplays and almost have finished performance "The Parables"as stage director and author of puppets and decorations with Sergey.

In 2014 reached the final at two International cinema festivals in London and Insbruk with our video film "Parables and something sad" (authors of the puppets , decorations and collages and also sculpture forms-Zhanna and Sergey Kondratsikovskiy, camera man-Lomer Akhvlediani, composer-Alexey Rybnikov).
Have some new plans for founding of a small art house cinema company in Batumi /Georgia and in Poland and also making new sculpture figures, paintings and collages for Saatchi Art.
My and Sergey artworks are in private collections in Belgrad (Jurgiana Ivezich),In Moscow-Jakov Marshak, Alexey Rybnikov,Natalya Solnyshkina, Alexander Kraytor and oth., in S.-- Petersburgh - Michael Chavchavadze, Natalya Lesina, in Geneve-Vincent Lusser, the USA president Bush consultant in 90-s Mr. Goncharoff, in the USA, in Paris -David Pier Marke ,and there are about 300 artworks in Tbilisi (collectors:Leyla and Zurab Demurishvili, Tengiz Meskhi, Viktoria Siradze, Ia Gamrekeli -the Georgian Culture Ministry Consultant, and oth.)

1994-Participant of the Georgian artists Art Exhibition in the Georgian Embassy in Moscow (organizer-Rusudan Andronikashvili, the Georgian culture specialist and ambassador). Our exhibitions are our performances ...Also we (Sergey and me) were collaborated with Elena Gromova Art doll gallery in Moscow and also were
participants of the 13 International author doll festival in Moscow and several puppet theatre festivals including the Obraztsov Puppet Festival in 2001 and exhibitions in Moscow and Tbilisi (one of them was private). Have diplomas and press .
I am author of more than 580 paintings, 55 wooden marionettes (with Sergey-88 marionettes)(you can see them in our photos and in our video on You tube ). Our website is now saatchiart.com/zhart You can also see our theatre video short "Parables" (you tube version) at 59Zhanna .