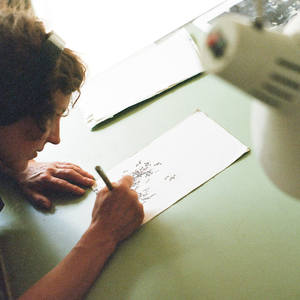 Crystal Hartman is a multi-media artist and a jeweler. Her artwork has been shown at locations such as the Center for Contemporary Culture, Barcelona Spain, the National Palace of Culture, Sophia Bulgaria and The Lill Street Art Gallery, Chicago Illinois. She received her BFA for Printmaking from The University of Colorado at Boulder, studied Image in Enamel at Ox-Bow, School of Art and Artist Residencies and teaches drawing and the love of creativity through small regional workshops. Studying Femininity in Argentine Society, filming with Null Skateboards in Spain, and diving into public art and cultural craft in Chaing Mai, Thailand, Crystal’s work is inspired by reflections on human experience, ritual and storytelling. Her large and small, whimsical, carnal creations open conversations within and between disparate perspectives. Hartman is a recipient of the National Watercolor’s Merwin Altfeld Memorial Award for Storytelling in the Arts and with inspiration from Willowtail Artist Residencies, is now working to share stories of pollination and pollinator studies. She was the founder and director of Durango Open Studios and is an active member and lover of the southwest Colorado arts community. Her writing and visual poetry can be found in Art Jewelry Magazine, CutBank Literary Journal and Interrupture Magazine, and through Open Country Press. Crystal Hartman Art Jewelry can be found at select galleries and fine jewelry stores throughout the west.