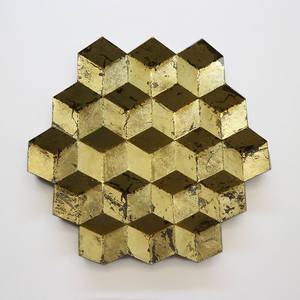 Mark and Paul Cummings intention is to create phenomenological experiences, with an interest for the occult, mysticism, technology and zeitgeist. With a specific focus in Hermetic wisdom and Druidic practices the subject of transcendence is critical to their work and its relationship to contemporary culture. They produce artworks namely sculptures and audio-visual performances too – being multidisciplinary they utilise any medium that suits the project best.

The Cummings twins still have technology as their mainstay but with maturity their work has flourished with a sense of spirit behind everything they do. Their current projects include ‘Polygondaydream’ that involves the creation of sculptures and also ‘The Mystery School of Sound’ that is a performance music piece relating to Hermeticism and the healing arts.

In 2006 after leaving university studying fine arts Mark and Paul Cummings headed straight for the heart of London settling a stone’s throw away from the Square Mile. They began a project that ran for about three years. Based in the epicenter of the city and immersed themselves in technology and urban culture. This was 10 years before digital Shoreditch and at the infancy of commercialized Internet; before this it was dominated by programmer geeks and not many artists had yet entered this realm.This was before the noise of the Internet grew and they had a lot of exposure and quickly became renowned for making very intense videos and digital artworks. Photography, video, music, animation and programming were the main tools for the production of shorts, interactive pieces and installations.
They soon became a household name within the digital art scene at the time. They were known as digital Punks working under the pseudonym of AZ2Lab. Their work was showcased around the world in events and exhibitions such as Japan, South Korea, Argentina, Brazil, Germany, Italy, Spain, Poland and the UK to name a few and they were also very widely published.
This brought attention from the commercial world and they began producing work for Diesel, Nike, Deutsche Telecom and many other international brands. All that was good came to an abrupt end - as they decided to leave advertising and push into the art world.
While still maintaining their digital heritage the twins started painting in earnest back to what they felt was traditional. Producing large-scale landscapes that covered the topic of politics and social critique.
Though seemingly hyperrealist there was always a computer involved at the starting point of the projects. The paintings were readily accepted into the national shows such as Mostyn Contemporary amongst others. The News Presenter John Snow chose the painting titled ‘Roadside’ for his own personal critique when the painting was shortlisted for the prestigious Threadneedle Prize 2010.

THE MYSTERY SCHOOL OF SOUND

OCT 2014
Abraxsas / Art and the Esoteric
Shelley Park Bournemouth Group show of art and magic in the famous Shelley museum and annex.

SEP 2012
E17 Arts Trail / Walthamstow
A group Exhibition on the subject of ‘Life and the Ordinary’.

SEP 2010
The Threadneedle Prize
One of seven artists short-listed for the Threadneedle prize for the best representational painting UK . Important contender for art prizes in terms of prestige and critical value. With critique by Presenter John Snow

MAY 2010
Standing On The Frontier / Group show
A group show by 13 international artists The images presented by the thirteen artists in this exhibition depict views taken on a figurative walk along the frontier between reality and the imagination.

MAY 1998
Festival Of Arts Gloucester / Locations 4
Exhibition of latest works based on architectural themes.

JAN 1998
Smiths Industries Aerospace / Commission
Painting commission depicting the CS-UK building. A prestigious project to be presented to the SIA on their official open day. The press event included attendees the Board of Governors and the Mayor of Cheltenham.