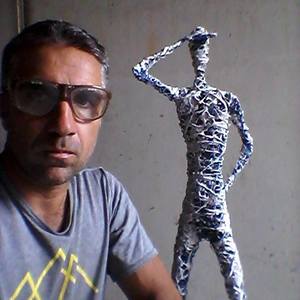 Michael Rizzi is an Italian artist born in Turin in 1971 (he currently lives and works in Pianezza, near Turin) best known for sculptures "Condensation and dispersion of matter."
Sculptures made with steel, wire and iron mesh, which enhance the feeling of discontinuity of matter (solids and voids), usually colored in orange or blue.
If the sculpture of the past was essentially remove excess material, this kind of sculpture is to score the material at the points established and well-measured quantity.
Regarding the forms, are prevalent human figures
who suffer from the most different influences ranging from the ancient Minoan art and African (athletic and Thin figures) to the sculptures of the last century by A. Giacometti to the latest figures pseudo alien or humanity of the future, up to the recent "Manga "Japanese.
The incompleteness and deficiencies are the added value of these jobs from which flows the perpetual fascination of the ruins and archaeological remains. The artist likes to think of the sculptures as in archaeological findings received from the distant future. The heroism and courage of facing life or just living is a recurring theme in these works as well as the simple contemplation, inordinate and disproportionate individual (humanity) in the presence of the universe, time and space.

Painting by Michele Rizzi follows a seemingly distinct from the sculptures but for neighboring intent and in some cases coinciding with the work in three dimensions. His painting came to degrees from a figurative painting (fantastic landscapes future) to a more abstract representation, up to an abstraction that is influenced by the painting of Gerhard Richter (physical and mechanical work on the color pulled with wooden frames) from which it deviates by rarefaction and for the insertion of figures that give more or less distinct size, depth and meaning abstraction transforming it into abstract landscape.
Both (sculpture and painting by Michele Rizzi) pursue the future in the knowledge that the future is essential from the past.
A sort of hole in space-time (black hole) that enables the past and the future to come in contact generating overlapping and hybridization and an infinity of shades and consequent emotions.

Architect. Degree in architecture at the Polytechnic
of Turin.
Recent interview
Obssessedwithart.com
QUESTIONS
Question 1: Why did you become an artist?
Probably because I grew up in a context that allowed me to. I grew up in a family of immigrant workers from southern Italy, I attended full-time experimental schools thanks to my training. I was a child with some difficulties in kindergarten (perhaps some kind of dyslexia) but with an innate ability, above average, to draw and paint which I have been able to attend countless ballets, theatrical performances, exhibitions that have left their mark n.
As a boy I attended a technical school and then the faculty of Architecture.
But the most important things I think it has always been possible to live in my father's stacks of waste and recovery materials (my father's second job) and to be able to use the most diverse tools and utensils from an early age. Another fundamental thing was to live free and wild in nature, childhood and adolescence. The faculty of architecture gave me the opportunity to enrich and refine the approach to the realization of my ideas. I may have traveled a tortuous path to become an artist but this has allowed me to arrive with a wealth of multidisciplinary knowledge.

Question 2: What mentors or other artists have had an influence on your work?
Having realized that I have this innate artistic ability, I have always been attracted to everything that was art. The first strong impact with the art world was the Calder exhibition in Turin in 1983 which I was able to visit and experience for a whole day as my father was part of the workers employed in the service of the exhibition. Another great and fundamental meeting was meeting when I was a boy, Giuseppe Penone (an important Italian poor art artist and currently one of the best known and most popular Italian contemporary artists).
By chance I worked for a company in the industrial warehouse adjacent to the Penone artistic laboratory. Seeing his works and studying was a shock for me.
Thinking of being an artist has therefore become a fixed idea for me.
Among the artists who influenced me, besides Penone, certainly the sculptors Alberto Giacometti, Antony Gormley, Arnoldo Pomodoro and Brancusi for painting Gerard Richter and Basquiat.
I am a lover of literature and cinema and in particular I am fond of the fantasy genre
and in particular of the films of Christopher Nolan.
Like him, I'm obsessed with time and space and their relationships. The point of connection between everything I like and what attracts my interest is "Time".
I like works that have a theme and an aesthetic that goes beyond the present and expands in the double direction past and future. I like works that are linked to the whole human race and from any era. Works that try to be universal, powerful, material and poetic. The attempt is simple and huge at the same time and is to create how the artists mentioned above works that go beyond time and also speak to an imaginary interlocutor in 100, 500, 1000 years just as we today get excited in front of an ancient sculpture Greek. In fact, many of my works are born imagining them as archaeological finds from the future and must bring with them an aesthetic and an archaic and futuristic value at the same time.


Question 3: Can you explain what you’re working on right now?
I am continuing a cycle of sculptures called "Condensation dispersion of matter" with subjects Star woman and Star man, which I have been carrying out for about 5 years. They are thin and athletic figures between the human and the alien who represent the man of the future and perhaps of the past with his task of exploring and understanding more the universe and the mystery of human existence. In these last works I am focusing more on the texture of the metal elements that I assemble to create the figures. What apparently seems to be a confused assemblage of elements I am realizing, myself, has a rhythm, a direction, a density which in its abstraction to something analogous to music and as if each part of the sculpture require

01/06/2016 Crucified for the new council hall of the municipality of Pianezza: sculpture and painting

Collections: private and public collection around the world