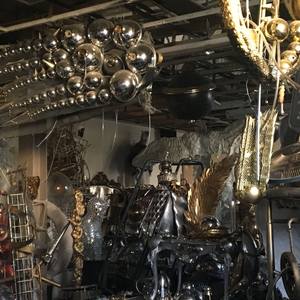 Award winning multi-media artist Sasha Meret was born in Romania in 1955, of Romanian and Russian parents. In his early years he lived in Moscow, Russia and later mostly in Bucharest, Romania. Since February 1987 he lives and works in New York City. From the very beginnings in his career as an artist he was ready to experiment with a wide range of materials and techniques. Painting, drawing, photography intersected with printmaking techniques like: intaglio, woodcut, aquatint or mono-type. Working in a variety of styles, from representational to abstract his imagery reflected his spiritual explorations, blending European, African, Asian, and esoteric symbolism in a highly personal visual language. He alternates figuration with abstraction in search for a balance between ideas and emotions. His main sources are his extensive readings on a wide variety of subjects as history, mythology, philosophy, literature and physics.

In 2003 he was diagnosed with Parkinson's Disease. After the initial shock he rallied, refocused and sorted out his priorities and his work took a very different and surprising turn. Realizing that when he is in creative mode his PD symptoms practically disappeared, he became a workaholic. A combination of a large studio offered by a benefactor and very generous subsidy from one of his collectors allowed him to explore for several years working and experimenting in a variety of media without financial worries.This brought him a prestigious CODAvideo award for concept (https://www.codaworx.com/awards/video/2014/winners). His range of materials and techniques widened and sculpture/assemblages with found objects and photography became dominant in the recent ears. Keeping his body of work together for years allowed him to transform his studio into a continuously evolving Installation/Environment. In his work Meret tackles theories, concepts, and historical events, concurrently reversing perspective or reinterpreting facts until the world surrounding him becomes a little more reachable.
He contemplates “If one removes sand grains one at a time, when does a heap of sand stop being a heap of sand?” and tests the wide concept of "change" and "transition". Often his works is an attempt to capture that elusive moment of transformation that is the fabric of what we call life.
His approach to the creative process is a continuous search for new challenges. He usually has several projects lined up, allowing him to consider them with a degree of detachment until that quintessential moment of clarity reveals the direction to follow; In his art Meret has only a few basic goals: a harmonious result that intrigues, challenges and has a healthy sense of humor.
"I welcome the happy accident, the accomplished error that helps me to think out-of-the-box and leads me often to the most innovative formulas.

He started his art education at an early age, in Bucharest, Romania enrolled in a special program for the gifted continuing his studies at the Fine Arts Lyceum "N. Tonitza". After graduating with a BA he got a master in Economics, while continuing his art studies privately. After his arrival in New York in 1987 he studied printmaking at Columbia University while working as an illustrator for The New York Times and other major publications.

Artist in Residence at IF Museum/Academy, Easton, PA