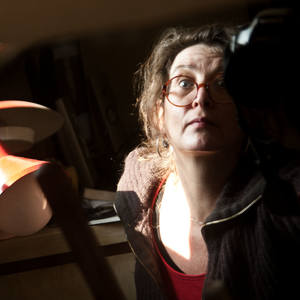 My name is Mara, it's from Mariela :)
1967, June 26 - Born in Sofia, Bulgaria.
I live and work in the capital of Bulgaria - Sofia. I like to experiment with techniques and materials. I love wood, metal and old things. That's why I often use them in my work. In the works that require more cunning, my husband helps me ... until sometimes we do things together and we have several mutual works.
Even on twitter we have a common profile - for both :)

The contests not are my passion, but I have participated in some: 2012 - in the gallery Pironessa, city of Plovdiv, for authors up to 45 years of age. I decided to participate only because the 45 came in haste :) And I got the prize - shared with the Bulgarian painter Rosen Markovski.
A decade ago I have a hobby for photography and it seems that being a plastic artist helps a lot to be a photographer :) The era of digitization - same :)
As I already mentioned, I do not like to participate in events and competitions and I do not do it often, but once I participate in an FIAP contest in Varna, 2012 and I shared the honor of being "best author" of the year with a colleague-photographer Of Ireland - Brian Hopper.
Cataloged works.

In all the years between 2007 - 2016 my photographic works have been delegated in multiple photographic exhibitions.